This week, You’re the Worst‘s Edgar Quintero is finally, albeit awkwardly, going to get some lovin’.

“I don’t think this has happened since he was, I don’t know, 18 years old?” Desmin Borges, who plays the FXX comedy’s good-hearted veteran, tells TVLine. “In my mind, Edgar hasn’t had a girlfriend since his last year of high school, since before he went on his first tour in Iraq. I’m sure there was a lot of awkwardness happening in that situation.”

In Wednesday’s episode (10:30/9:30c), Edgar’s new girlfriend Dorothy will spend the night at his place… and face the scrutiny of roommates Jimmy and Gretchen — plus Lindsay — in the morning. Below, Borges previews how that interaction will go (hint: about as well as you’d think it would), how Edgar may be able to help Gretch in her time of need and whether all of this newfound sex means we’re likely to see his character naked on a driveway in the near future.

TVLINE | I’m happy to see things looking up for Edgar. For such a long time, he was in a hard, sad place.
Yeah, me too. But I kind of knew that was the trajectory we were going to be on, because Edgar’s storyline is a little off to the left rom the other three. They’re at a place where they’re OK with themselves so they can try to be in relationships or try to not be in relationships and then find themselves in relationships, whereas I feel a lot of the first season was Edgar feeling comfortable with himself so he could be in a place to actually accept a relationship if it came to him.

TVLINE | The next episode finds the gang stuck in the house — with Dorothy — on the day of the Los Angeles Marathon.
If I remember correctly, she spent the night, so Edgar actually had a girl sleep in the room with him… While things are going really great with her and I, everyone else is a little weirded out that there’s an outsider that has brought in — especially Lindsay.

TVLINE | The Lindsay-Edgar story: Now that he’s with someone and happy, that seems like the exact point a character like her would be like, ‘Oh, you’re the one I want.’
Of course. I mean, that’s the way it is in real life: You never want the person that wants you… We’re going to see a lot of that tug back and forth because that’s the nature of who Lindsay is. At this point, she’s grasping for anybody that will love her and take care of her by any stretch of the imagination — which is an interesting thing for us to play, because Edgar and Lindsay always had a really nice connection. Their friendship, I feel, is the most important part of that connection — whether or not they ever get together down the line in this season or in following seasons, if we’re so lucky. 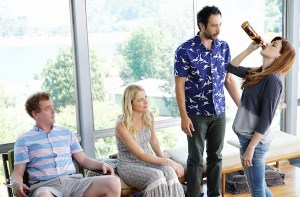 TVLINE | The episode coming up also is the one where Gretchen reveals to Jimmy what’s going on with her. Edgar has experienced psychological/emotional trauma; I wonder if there’s any room for him and Gretchen to bond there?
I think there is. Of course Jimmy’s going to be Jimmy and deal with it in his way and Lindsay, since they’ve been friends for so long is already previously aware of this information, she knows what it’s like, the ups and the downs with Gretchen. Edgar has other, similar issues along the same line. So if anybody can relate and connect with her and offer any help if need be, he would definitely be the one and be willing to do it at any time in the day or night. But also at the same time he understands with an issue like clinical depression a lot of it is stuff you really have to work out solo. It’s not really something anybody else can fix.

TVLINE | What can you tell me what’s ahead for Edgar and Dorothy, in terms of their relationship?
Edgar hasn’t been intimate in a really long time, so we’re going to see the struggles and the downsides of somebody who is still an adolescent when it comes to intimacy which is always weird when one of them happens to be a 30-year-old man. [Laughs] So we get to play with that a little bit.

TVLINE | Does that mean we’re going to see you wind up naked on a driveway, like Jimmy and Gretchen last season?
Maybe. [Laughs]

TVLINE | Have you had to shoot anything crazy like that?
I’m not naked on a driveway, but there is some bumping of some uglies for Edgar, finally. So I’m not going to tell you when that’s going to happen, and I apologize for what it looks like in advance. [Laughs]