I’m so relieved to report that one of Quantico‘s most pressing mysteries is solved in this week’s episode.

It’s not “Who is framing Alex as a terrorist?” Or “Where do Simon’s true allegiances lie?” Or even “Why is Liam such a blowhard jerk?” No, the truth bomb detonated in this episode is that we finally find out why Shelby so often wears her hair in a side-ponytail: It’s the easiest way to camouflage the fact that Johanna Braddy’s tresses are actually bobbed, and the add-on length helps to distinguish Present-Day Shelby — whom we encounter during the hour — from Quantico-Era Shelby.

What, people? Four episodes in, you expected some major revelation from a show whose characters’ backstories twist more than taffy at a state fair? On that note, let’s maybe keep this Shelby-hair intel eyes-only until someone can get a 20 on it next week, affirmative?

Read on as we review what happens in “Kill.”

NUMBER ONE WITH A BULLET | Liam wakes up the recruits with a surprise early morning gun test, but Alex is ready: After having a nightmare about shooting her dad, she’s already put in a full workout and is ready to seize the day. Shelby and Ryan both approach her, concerned that she’s not handling last episode’s revelation very well, but she’s all, “I got closure, and I’m fine,” and then she nails the shooting exercise, so who are they to argue?

Pretty soon, Ryan has a bigger problem to handle: O’Connor says Alex has been proven unfit for the FBI (um, when?), so all Ryan has to do is help her come to the decision that she should drop out of the program and he’ll be done with his mission. Booth is stymied, yet he somehow manages to stand in the exact beam of sunshine to make his eyes glitter like sapphires on the ocean floor as he tells his boss it won’t work. “Trust me, she’s more fragile than you think,” Liam says. “Just give her a push.” 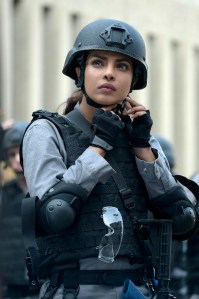 MIRANDA’S SECRET REVEALED | This week’s lesson: how to not completely lose your stuffing in high-stress situations, such as the mock hostage rescue training the recruits undergo in a simulated neighborhood. (Side note: Given the look of those houses, I have expected some of Bravo’s housewives to pop out from behind corners. Anyone else?) Alex and Shelby are a team, and they do well, but Alex leaves her partner far behind and is a bit of a jerk to her after the run-through. “We’ve only known each other a month. We barely know each other at all,” Parrish says, needling Shelby for her late night phone-calls and secretive emails. “What was really in that file?” Wyatt asks in return. Neither leaves the conversation satisfied.

Next up, a fake office-hostage situation in which Alex freezes (she pictures her father holding a gun on her mother), and her pause gets Simon and Ryan “killed.” Good on Raina, though; with help from her surprisingly supportive analyst, Caleb, she comes through and is able to nullify the shooter.

Speaking of Raina: Miranda realizes that Nimah has taken off and tracks her down, explaining why she needs her in the program. Miranda’s son was recruited by a terrorist organization, which was involved in his (thwarted) plot to attack his high school. As we saw last episode, he’s in juvenile detention with the possibility of parole — and Miranda confesses she hopes he doesn’t get it. “What kind of thing is that for a mother to pray for her child?” she says, crying. Nimah and Raina are part of Miranda’s (still really fuzzy) plan to infiltrate that terrorist group, and Miranda’s tears must work, because Nimah returns to the fold and apologizes to her sister.

DADDY WAS A DOG | In Miranda’s office later that day, Alex admits to the assistant director and Ryan that she’s a little messed up after learning her dad wasn’t the creep she thought he was. Miranda sets her at ease, noting Alex’s dad’s censures, abuse of power and tendency to drink too much: “Being a good agent doesn’t mean you’re a good man.”

Feeling better about the whole thing, Alex apologizes to Shelby, who in turn tells her that the emails and calls are to her half-sister, whom she didn’t even know about until after her parents’ death — and with whom the FBI doesn’t know she’s in contact. It’s nice to see the roomies in harmony again, but this is the second episode in a row where these two have fought and then made nice in the space of an hour. Especially given what happens in the present-day storyline (more on that in a minute), maybe we can have Shelby and Alex just get along for the rest of their Quantico time?

After some intense flirting with Alex in the loo (I have not seen such lusty shared-bathroom banter since Beverly Hills, 90210′s Brenda and Dylan), she calls her mom to admit she’s enrolled at the FBI (and not grad school), and Ryan confronts O’Connor about his mission being off book. Joke’s on you, Liam counters: Ryan’s not actually undercover, he’s on probation! I wonder what Miranda, who’s listening in via Ryan’s phone, thinks about this new wrinkle…

A WEIRD AND WIRED RIDE | In the present day, as the FBI closes in on Alex, Simon gets texts from both FBI big shot Clayton (warning him to stay put) and Ryan (exhorting him to get Alex outta there). Simon is torn, but he eventually grabs Alex and takes her to his wire expert in Brooklyn. (Side note: It continually amuses me that Alex’s “disguise” is a baseball cap and the hood of her jacket. What, Party City was out of the Groucho glasses and mustache?) 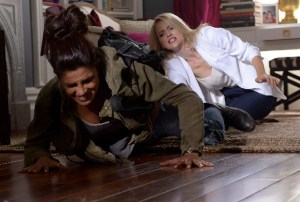 Simon’s wire guy (who speaks only Hebrew throughout the entire exchange, which makes me not trust Simon’s translation to Alex) says the wire was made by Shelby’s family’s company, a Halliburton-type entity. Next stop, Shelby’s place! They break in and realize that Shelby has recently returned from Buenos Aires — which gives her an alibi for the bombing. But then Shelbs comes home, all red lips and attitude, and pulls a gun on them, screaming that she’s going to bring Alex in. Alex counters that Shelby might’ve been the terrorist. “Your whole world fell to pieces when I found out the truth about your parents. I never meant to hurt you!” she says, but Shelby won’t be deterred… until Ryan shows up, points his gun at Agent Wyatt and announces that the feds are about to raid the place.

ROOMMATE REUNION | There’s a lot of yelling, then Ryan and Simon depart and Shelby and Alex fight, winding up handcuffed to each other in the backseat of Shelby’s car. (Not like that.) The FBI doesn’t see them in there (great work again, G-men and G-women!), and when Shelby comes to after Alex knocking her out, it’s to the knowledge that she’s the fugitive’s hostage.

Back at command central, Clayton announces that they’re no longer interested in keeping Alex alive. “From here on out, it’s shoot to kill.”

Points I didn’t cover (but that you should discuss in the comments): Elias’ observations about Simon, Ryan and Nathalie’s relationship and the Facebook-ish page Quantico-era Simon was looking at near the end of the episode. Get talking now!