As a follow-up to the Brennan/Crane image we brought you earlier this week, we’ve got an exclusive shot of the FBI agents at work in the Oct. 29 Bones/Sleepy Hollow crossover event.

The two-hour event finds Brennan, Booth, Ichabod and Abbie collaborating as the discovery of human remains leads to the return of one of Crane’s enemies. And from the look on Agent Mills’ face, it appears that maybe she’s a wee bit impatient with the seasoned G-man’s plan.

When Bureau vet Booth meets fresh Quantico grad Abbie, Bones star David Boreanaz told TVLine during a recent visit to the set, the situation partly becomes a study in how much Seeley has grown.

Both dramas air all new episodes tonight: Bones at 8/7c and Sleepy at 9. Peruse the photo above, then hit the comments with all of your hopes and dreams for the crossover — which is just two weeks away! 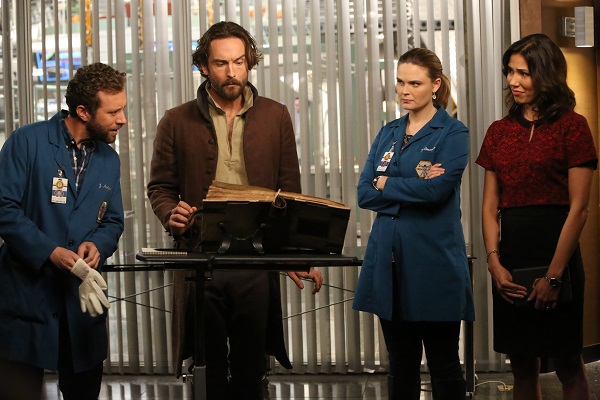