After portraying an immortal bloodsucker on the cult fave Moonlight, Jason Dohring is going back to basics as The Originals‘ Detective Will Kinney, a human role that may cause pause for concern.

Given the nature of the CW series (decapitations are pretty much the norm) and Will’s close relationship with Cami (aka the object of werewolf/vampire hybrid Klaus’ affections), it’s no wonder that Dohring is a little apprehensive about his character’s fate on the show (airing Thursday at 9/8c).

Below, the actor talks about Will’s life expectancy, his “attraction” to Cami and the CW drama he wants to appear on next.

TVLINE | Does it feel weird being on a supernatural show and not playing a vampire?
Yeah. I remember drinking that blood, and it was just…not the best. At the same time, it’s fun because you get to do all the cool stuff like fly around — at least our vampires were flying and s–t. Usually, they live the high life — driving Ferraris and having loads of money and being in people’s faces and just not caring. So this is very different because you have a much more strict set of rules and limits to who your character can be.

TVLINE | What are you enjoying about portraying a human on a supernatural show?
I enjoy the detective element of it because there are certain guidelines to the character. A detective can’t be “blah” or whatever. He’s just had training. Coming out of being on shows where I was kid and a spoiled brat, to find roles that are like a teacher [such as on Ringer], it’s just been cool because it’s more acting rather instead of emotional-based. There’s different characters features that are interesting to play with. 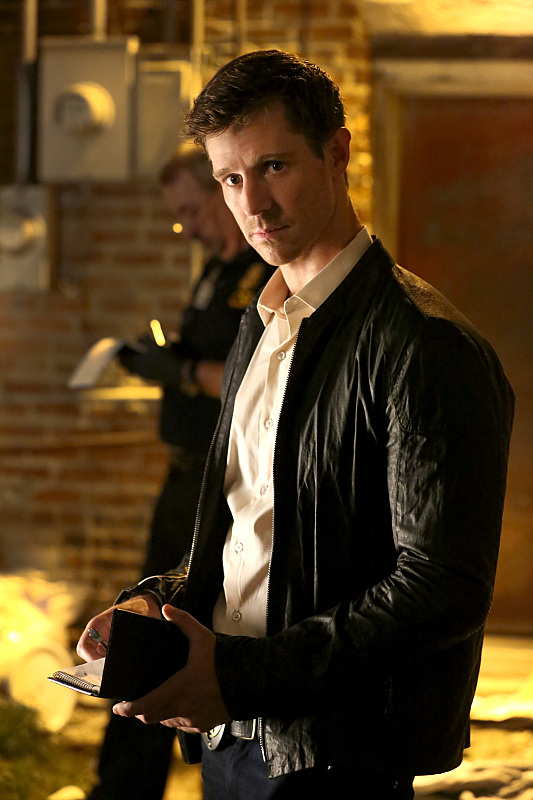 TVLINE | We see a little bit of Will at work in the premiere, but not too much. What kind of a detective is he? A by-the-book type? Does he bend the rules?
All police officers, good ones, bend the rules a little bit and in life, too. He’s smart, confident [and] wants to find out what’s going on after he discovers this serial string of murders. In the future episodes, he winds up getting more pulled into the supernatural world. He’s determined to figure it out, so he winds up in this terrifying situation.

TVLINE | There are a lot people in positions of power on the show who do know what’s going on. How much does he know about the supernatural?
He doesn’t know about the supernatural world, but he has suspicions that something is going on beneath the city. He enlists the help of Cami and Vincent, who’s a friend from before, a confidant, and he knows about the occult, so [Will] pulls him in to find out more about it. He suspects that he’s not being told everything, ’cause he’s a detective. So he goes, “That’s true, but there’s something else you’re not saying. What is it?” They don’t want to reveal what’s really going on.

TVLINE | Almost every character on the show has some deep, dark tragic history or secret. Does that also apply to Will?
I guess I’ve thought of things. It’s always weird to introduce a character. That’s probably the hardest thing to do is your first couple scenes because you have to build this memory of the character so it doesn’t look hollow. I tried to do that.

TVLINE | But he’s not hiding anything on screen so far?
No, not really. I just gave it a couple things in my head to make it interesting or dramatic for me.

TVLINE | How would you describe the dynamic between him and Cami?
It seems like it could be straight-by-the-book — help and a romance sort of thing. But there is this aspect of when you’re trying to figure out something and you’re not being told the full truth by that [other] person. There’s that aspect where she doesn’t want me to find out too much. She wants to help mostly for herself to figure out what is going on. I have clues, I have the conventional data that’s being gathered and stuff like that, and she has the bulk of the behind-the-scenes. [We’re] working together, but neither one maybe wants to give away all their cards.

TVLINE | Is there romance for Will, possibly with Cami?
There’s certainly an attraction. He respects her right from the start… She’s smart and she’s not one to be messed with. They’re both good people and they connect.

TVLINE | He’s spending a lot of time with her, which I have to imagine does not sit well with Klaus.
Right, exactly. So we’ll see how long I stay. [Laughs]

TVLINE | Do you worry about your life expectancy, playing a human?
I know that they’re food, right, essentially. Disposable. But as long as the story can be moved forward with purpose that this character might introduce, if you’re contributing, then it’s cool.

TVLINE | You’ve now done The Originals, Ringer, Supernatural and The Tomorrow People. Is there a CW show left that you want to guest-star on?
Oh, man, let’s see… We were talking about iZombie at some point.

TVLINE | Rob Thomas mentioned to me you were emailing about a role before you were cast on The Originals. Is there a particular type of character you’d like to play on that show? Zombie or human?
I guess zombie, right, because that’s more character. Detective zombie. [Laughs]