OK, that’s it: I’m putting out an official APB for A Dog Named Sue.

If you’re new to Nashville, you might not know that Deacon once had the cutest dog in the world, but he gave it away to a perfectly good ex whose biggest flaw was that she wasn’t Rayna. That dog’s name? Sue — a nod to Mr. Johnny Cash.

And while I’m sure Deke saved himself a lot of besmirched carpets, way-too-early morning walks and chewed furniture, he also denied himself — and all of us! — the special cuddly comfort a pup provides during rough times.

Like when your sister dies after donating you part of her liver.

And you can’t bring yourself to let your lady help you feel better, no matter how hard she tries.

And even your old failsafe, an Alcoholics Anonymous meeting, isn’t enough to help you sort through your conflicting emotions.

Pooch snuggles may not be the cure for what ails ya, but they certainly don’t hurt, is all I’m saying. And they’re certainly better than putting your hand through a mirror.

Read on as we recap the action in “”The Slender Thread That Binds Us Here.”

PUT DIRT ON MY GRAVE JUST YET | Beverly’s graveside service is as depressing as you’d imagine, with a newly returned Zoey singing “Precious Lord Take My Hand” a capella and Deacon pretending to ignore Scarlett. On that note: Good literal grief, Scar — could you not ditch the chunky hemp necklace for this one occasion? I have no idea why that thing is always around your neck — maybe you pinky-swore your camp bestie that you would wear it until it fell off or something (Cabin 6 forever!) — but it always pulls my focus. How about you take a note from Rayna, whose grief-hat game is on point? And that’s a good thing, too, because she has to step up and finish the eulogy when Deke is so overcome he can’t go on.

The post-funeral goings-on, summed up succinctly: Scarlett approves of Will’s coming out, Zoey is seeing someone in Los Angeles, Markus Keen calls Rayna to say he’s arriving earlier than expected, and Gunnar’s hair somehow gains three inches of man-pouf between the start of the scene and its conclusion.

A NEW LOW | Irked that Juliette has missed three press opportunities due to her hard-living-life-hating ways, Jeff all but drags her out of bed and demands that she allow a reporter to shadow her for 48 hours. “Get it together and show ’em how amazing it is to be you,” he barks before taking off for Nashville.

I’ll give it to JuJu: She planks like a boss and looks like a goddess while the journalist watches her every move, but the intense scheduling and constant scrutiny take their toll. Pretty soon, she’s asking New BFF Who Is Such a Terrible Person I’m Not Going to Name Her, Like Voldemort, for a little chemical assistance.

Cut to Juliette popping Adderall, then combatting it with sleeping pills and booze, then almost losing her stuff when a radio DJ shows her a gossip rag’s photos of Avery, Emily and Cadence sitting on a blanket in a public park. “You lying bitch!” Juliette screams into poor Em’s ear, via phone, the first chance she gets. “You’re just a golddigging, backstabbing whore!”

Eventually, New BFFdemort fetches a doc to inject Juliette with — I don’t know, horse tranquilizers? — so she won’t feel anything. And that’s when Avery calls with the news that Cadence is in the E.R. with a high fever, but New BFFdemort isn’t real clear with the message on either end, so Ju doesn’t know her daughter was in danger and Avery thinks his wife doesn’t care about them anymore. (Side note: In light of the recent news about Hayden Panettiere, it feels a little icky to watch this storyline unfold, no?) 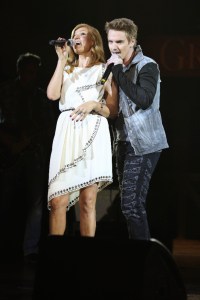 NOT SO KEEN ON MARKUS | Smirky Turtle Jeff (nearly sans shell!) and Layla lie in bed together chatting about her upcoming Grand Ole Opry debut. She frets that Markus’ arrival as a Highway 65 artist will push her farther down Rayna’s list of priorities, but Jeff — I know, I can hardly believe I’m about to type this, too — is a supportive voice of reason when he reminds her that “a rising tide raises all ships.” Then he gives her a pair of snazzy new cowboy boots, and it’s actually a little… cute?

Layla kills it at the Opry, but her success is later marred when Markus Kanyes his way onto stage while she and Rayna are chatting with the crowd. He’s like, “Imma let you finish, but…wait, actually? I’m not.” Layla storms off, but no one notices; Rayna does a playful duet with him but later tells him usurping the spotlight “was a little uncool.” He apologizes, then asks that Avery — whom he met earlier, thanks to Big Red — become his producer. This seems like an appropriate time to note for the record that Markus seems like the biggest d- to ever bag in Music City, and that’s grading on the Liam Man-Scarf Curve. And from Rayna’s face as he leaves her dressing room, she’s thinking the same.

Meanwhile, Will comforts a crying Layla by telling her “It’s all right to be happy with what you’ve got, even if it ain’t perfect.” Aww, that was basically the tagline of their sham-marriage reality series! Later, she apologizes to Jeff, who kisses her right there in front of everyone… including a wary Bucky.

GUNNAR DE BERGERAC | Caleb wants to be there for Scarlett, but he’s suddenly all awkward about it, and she tells Zoey that being with him is like “hugging a textbook.” So he writes a poem and takes it to Gunnar for some songwriting help. Gunnar uses the words as the basis for a ditty that proves Caleb’s love and support for Scar — watch out, Caleb: If things continue apace, you just might wind up crooning a Civil Wars cover next to Gunny at The Bluebird while Watty holds his phone up in awe.

Scarlett is impressed that Hot Doc went to such lengths to help her, so they have grief sex and she laments losing not only her mom, but Deacon, too.

DEACON IN THE DUMPS | I wish I could say that Scarlett is overreacting, but Deacon truly isn’t giving an inch in his you-killed-my-sister stance. His anger boils over in even the smallest moments, such as when Rayna’s talking about what to make for dinner. “I sure as hell don’t want to eat some damn funeral casserole,” he spits, and I know you’re hurting, honey, but THAT BAKED ZITI DID NOTHING TO YOU.

He goes to a meeting and gets a new sponsor, but he’s still in such bad shape that he trashes Beverly’s room — while Maddie watches — and admits that he really wants a drink (though, thankfully, he doesn’t have one). At the end of the hour, Rayna holds him close as he grits out how furious he is. Beverly never gave up, he says, but “Scarlett gave up.” And though I want to violently shake some sense into him, even in his grief, we’re going to have to leave it there for this week.

Now it’s your turn. What did you think of the episode? Sound off in the coments!