Warning: The following contains spoilers for Tuesday’s episode of The Flash

It’s a big, big world on The Flash. So big in fact that Tuesday’s episode of the CW series introduces another Earth, where Wells still exists as S.T.A.R. Labs’ founder, Jay Garrick (AKA the Crimson Comet) races through the streets and the speed demon Zoom is out to get him.

Now on Earth 1, Jay warns Barry of the threat from Zoom and the many breaches between worlds that the singularity created. Needless to say, the scarlet speedster’s team has a full plate of worry.

“It’s very bad,” previews Todd Helbing, who co-wrote the episode with his brother Aaron. “There are 52 breaches and Zoom can come through any of them with whoever he wants, so they have to figure out quickly how to manage the biggest threat to them.” 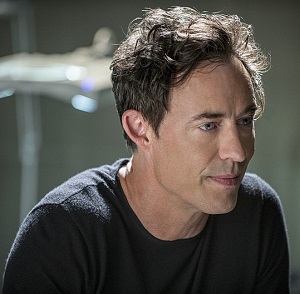 WELLS 2 | Viewers haven’t seen the last of the doc in his new surroundings. “Since we introduce Earth 2, there’s always a possibility we’ll go there,” Aaron Helbing reveals. “Not necessarily early on, but you’ll see more of it, yes.” Finding a way to bring back star Tom Cavanagh despite his character’s death last season was an easy decision for the producers. “If it were up to me, I’d have Tom Cavanagh in every show,” Todd Helbing says. “He’s amazing. It’s such a unique opportunity to have a character that everybody fell in love with and everybody hated at the same time and try to reinvent him in a different way. That was always the plan. It was just a challenge to figure out how to do that and have it be satisfactory.”

ZOOM INTO YOUR NIGHTMARES | The new Big Bad will prove to be a much more menacing foe than the Reverse Flash, who “had to hone Barry to get what he wanted,” Todd Helbing describes. “Zoom is just like your worst nightmare. He’s going to come in and if he doesn’t get these [villains] to do what he wants, he’s going eventually show up and try to take [Barry] down himself. He’s the scariest speedster on the planet.” To put it bluntly, “Wells had a bit of a conscience now and then when it came to Barry. Zoom wants to kill Barry,” Aaron Helbing explains. So why doesn’t he just travel through the breach and do it himself? “There is a reason, but you’ll learn that down the line,” is all Todd Helbing will say. 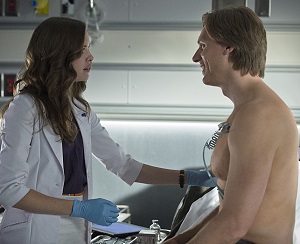 A NEW ROMANCE? | If you noticed a spark between Jay and the widowed Caitlin – and it was pretty hard not to – you were right to pick up on a “connection” between the two scientists, his portrayer Teddy Sears says. There’s “almost an instant comfort level. That wonderful thing you don’t get with too many people in life, these two experience. They’re going to explore that a little bit.” Adds Todd Helbing: “There’s something that he is struggling with that you’ll start to learn in the next couple of episodes. That’s partly where Caitlin comes into play, to help him with something.”

FIRESTORM 2.0 | Given Dr. Martin Stein’s collapse at the end of this Tuesday’s installment, it’s obvious “with what happened to Ronnie, he’s missing a side of him that he’s had for quite a while now, and that’s going to start to sneak up on him,” Tood Helbing teases. But while the team searches for a new Firestorm match for the doctor, could Robbie Amell’s Ronnie return in another world? “We’re in the Flash-verse, so anything is possible,” Todd Helbing says. “There’s Earth 2, there’s multiverse. There’s always the possibility for Ronnie to come back.” 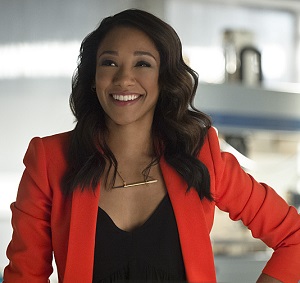 THE FAMILY WEST | Wells wasn’t the only character to make a surprise appearance in this week’s episode. Iris’ MIA mama Francine also returned “to see her daughter and reestablish this family that she once had,” Todd Helbing previews. But why she’s reaching out now is a mystery that will be revealed in time, and when it is, it will cause some upheaval for her daughter. “Iris, obviously, has this conception about her mother and her being away from her her whole life,” the EP describes, adding that new truths “will turn [Iris’] world upside down.”

SPIVOT TWIST TO WESTALLEN | While the titular speedster hit it off with science-geek cop Patty Spivot, “Iris is always Barry’s lightning rod – best friend, first love of his life,” Todd Helbing points out. “But she just lost Eddie, so as she is dealing with this and Barry and Iris are slipping back into that friendship mold, it leaves an opportunity to explore a relationship with Patty. We’ll see how that develops. But Iris and Barry are childhood friends and loves and that’s always going to be there for both of them.”

Flash fans, what did you think of the multiverse-tastic episode? Sound off below!