After making his presence known at the end of last week’s The Flash, Jay Garrick officially unveils his identity and origins to the S.T.A.R. Labs team in Tuesday’s episode (The CW, 8/7c). While Barry and Co. aren’t aware of the character’s history, comic book fans are very familiar with the iconic persona, which made stepping into the role all the more exciting for his portrayer, Master of Sex alum Teddy Sears.

“It’s thrilling, but I didn’t anticipate how thrilling it was going to be when I said, ‘Yes,'” Sears says. “Besides the obvious stuff — suddenly I’m eight years old, running around in my backyard, playing superheroes with my friends — what I didn’t anticipate was how important it felt when I was doing it. It’s weird and hokey and maybe very actor-y, but there was something very important that began happening.”

The significance of the role was sealed when Sears donned a very distinctive part of Jay’s ensemble. “There’s that scene where I’m reunited with the helmet for the first time, and I remember shooting it,” he says. “There was a real awe and reverence for seeing this thing. That was absolutely not acted at all. There was such substance in that moment.”

There was also plenty of detail put into the prop by the production team. “If you look at the helmet,and we’ll certainly have enough opportunities to, it’s been around,” Sears says. “It’s beaten up, it’s got the dings, it’s seen its share of battles. To have it arrive with a story and a history and a past, that’s really what made it work for me.”

But Jay Garrick is about more than just his costume; he’s also got a big mission. “Jay’s biggest rival is Zoom, and he needs Barry’s help to defeat this guy,” Sears previews. “When we see him, he arrives without his speed and he knows what Zoom is capable of, so he very much needs to enlist Barry and he needs to have Barry harness these powers and these depths that he didn’t know he could reach. He needs Barry to achieve these things in order for him to defeat Zoom.” In partnering up to take on the Big Bad, the two (good) speedsters develop a “wonderful mentor/mentee” dynamic.

Adds Todd Helbing, who co-wrote the episode, “Last year, [Barry] didn’t really have anybody that he could speak about being a speedster with. It’s not like he could go out and have drinks with Wells and talk about being a speedster, but he can with Jay. And Jay can mentor him in some of the powers that he has and figure out the best way to use them.” 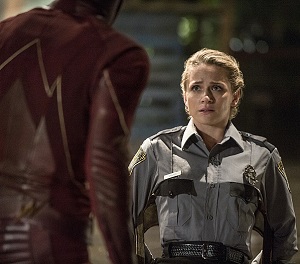 “We wanted to make her this very strong, hardcore female cop who has a purpose,” Helbing shares. “Originally, we talked about how she’s kind of like Felicity [from Arrow], but the second we started writing her, we felt like we had to make her quite a bit different. We wanted to have her feel part of the show and part of the universe that we’ve set up. Just somebody that was in this for the right reasons, hellbent on stopping…metahumans and somebody that could feel like she was part of the metahuman task force and hold her own.”