When the Manhattan rat race wears you down to the point that a butter-ad slogan is all it takes to make you uproot your entire life, what better place to land than West Covina, Calif. (“Two hours from the beach, four if there’s traffic”)?

That’s the premise of The CW’s new comedy Crazy Ex-Girlfriend, which follows young lawyer Rebecca Bunch (played by Rachel Bloom, Robot Chicken) as she follows her heart — and the seriously flimsy hope of reuniting with a camp boyfriend — all the way to the West Coast.

We meet our screwball heroine in 2005, as she and Josh Chan (Vincent Rodriguez III) are parting ways at the end of summer camp. She assumes they’ll maintain the relationship throughout the school year; he calls her “weird,” tells her he needs space and responds to her declaration of love with “Thanks for that!” as he scampers to his parents’ car.

A decade later, Rebecca is a very successful lawyer in New York City, but her life is colored in shades of gray and an omnipresent ad for butter — which asks, “When was the last time you were truly happy?” — makes her seriously doubt her life choices. So when her firm offers her a junior partnership, she has a panic attack and goes outside to pop pills/pray for guidance. The next thing she knows, Josh just happens to walk down the street in front of her.

He seems happy to see her, and as angelic choruses sing in Rebecca’s head, he tells her he’s moving home to West Covina to get away from the craziness of the city. He offers her a bunch of compliments and his phone number, which is all the impetus Rebecca needs to turn down the promotion and relocate to West Covina —  or, as she calls it, “where dreams live.”

The move ushers in the series’ first big musical number, a huge song-and-dance sequence that makes fun of West Covina’s utter blandness/slight seediness and ends with Rebecca hoisted high on a giant fake pretzel. Soon, she’s set up with a job at a small firm populated by co-workers like Paula the paralegal (Donna Lynn Champlin, The Good Wife), who is very suspicious of the new girl, and Darryl (character actor Pete Gardner), Rebecca’s dorky-but-good-intentioned boss. 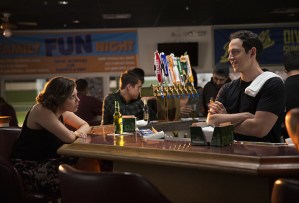 When a text to Josh goes unanswered, Rebecca stalks him to a sports bar, where she meets Greg (Santino Fontana, Mozart in the Jungle), one of his friends who asks her to a house party the next night. She spends an inordinate amount of time getting ready — to the ridiculously catchy strains of “Sexy Getting Ready Song,” complete with Spanx dancing and a featured rapper so taken aback by the unfairness of “nasty-ass patriarchal bulls—t” that he’s “gotta go apologize to some bitches” (ha!) — and then spends the evening kissing Greg but looking for Josh — who never shows up, thanks to plans with his… girlfriend.

Yep, the entire reason Rebecca transplanted her entire life is taken. So why does his Facebook status say he’s single? And when Paula tracks the heartbroken lawyer down at the party to say she’s figured out what’s really going on, she pledges to help her new co-worker/friend get her man, no matter what. And when Josh texts back to say he’d love to get dinner with her, it’s on.

Though Rebecca’s plight is ridiculous — and nothing Felicity didn’t cover in less ludicrous fashion years ago — Bloom is incredibly watchable. The comedy does well in an hour format (as opposed to the half-hour it was originally conceived as), giving us a chance to get to know the supporting players a bit better. And the musical numbers are fun; c’mon, you know you’re gonna be humming “Sexy Getting Ready Song” tomorrow morning as you prep for work!

Now it’s your turn. Grade the premiere via the poll below, then hit the comments to expound upon your pick!