This week, possibly for the first time ever, You’re the Worst may pass the Bechdel Test.

For those unfamiliar with the term, the Bechdel Test was first put forth by cartoonist Alison Bechdel to evaluate fiction: If a film/book/TV show contains at least one scene where two female characters have a conversation that isn’t about guys, it passes muster. (Side note: Most don’t.)

In this week’s installment of the FXX comedy, “Gretchen and Lindsay discover all they do is talk about men,” star Kether Donohue tells TVLine. “And they set out to change the status quo.”

She continues, “It’s something we’ve never seen before on You’re the Worst, where Gretchen and Lindsay become self-aware of their own indulgent conversations about d—ks and men and all that. They’re like, ‘No, we need to be smart here,'” Donohue previews. “And then you see what that looks like, and that’s very funny.”

As you might guess, Worst‘s besties have a tough time finding dude-free topics of conversation.

“That’s part of the humor. It speaks to the truth of what I think a lot of women go through,” she says. “Because when you sit down to brunch with your girlfriends… whether you’re single or in a relationship, you’re going to be talking about your love life.” 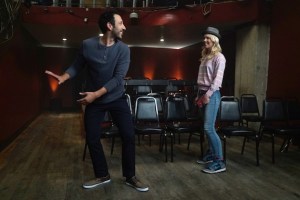 Speaking of matters of the heart: The episode also introduces Collette Wolf (Cougar Town) as Dorothy, Edgar’s lovely improv teacher. And though Lindsay and Dorothy don’t interact in Wednesday’s episode, look for “some funny dynamics” to unfold for the two ladies — and Edgar — in the future.

“Lindsay’s world is crashing down. Paul is off with Amy. He was her crutch for so long. And now Edgar, who was her other crutch, is off with Dorothy,” Donohue previews. “You see Lindsay being left, deserted by all these men in her life who validated her.”

It’s a low point for the character… which is really saying something, considering that last week’s episode ended with her trying to inseminate herself with her ex’s microwaved sperm and then icing the injured area with a frozen treat.

“One of my favorite movies as a kid was Mrs. Doubtfire. You know the scene where Robin Williams is in his Mrs. Doubtfire costume and his mask falls off? And he’s rummaging around the kitchen, like, [in Robin Williams voice], ‘I need a face. I need a face’? And he just ends up shoving the cake in his face?” she says. “When we were shooting this, I felt like him in the scene, running around. At the end, I don’t know if you noticed, I have wet [stains]. That was not makeup. I worked up a genuine sweat.”

And though Lindsay may not have cared if she knew Edgar was watching her through the window, Donohue had one condition for that day of filming. “When I stick my leg up on the counter, the crew was to the right of me. I was like, ‘Oh no. The crew is going to see my vagina!,'” she says, laughing. “So I requested to have some sort of board put between me and the crew because I didn’t want anyone to see my private parts.”

Donohue’s I’ll-do-almost-anything attitude also served her well in a recent callback for Fox’s live production of the musical Grease. She landed the role of Pink Lady Jan, she says, in part because of a misstep at the very beginning of her audition.

“When I walked in the room, I tripped,” she says, giggling. “I literally almost fell on my face. They started laughing and I was like, ‘Well guys, I did that on purpose to show you I can do physical comedy. I totally planned that out.'”