We’ve got questions, and you’ve (maybe) got answers! With another week of TV gone by, we’re lobbing queries left and right about shows including Once Upon a Time, CSI, Masters of Sex and Bones!

2 | Would Blue Bloods’ Frank really have covered up the NYPD’s successful thwarting of a terrorist attack?

3 | Did CSI‘s costume designer get a discount on hideous hats for the series finale? Also, was the major focus on Grissom/Sara a fitting sendoff — or would you have preferred a better case and more spreading of the wealth among the show’s returning players? 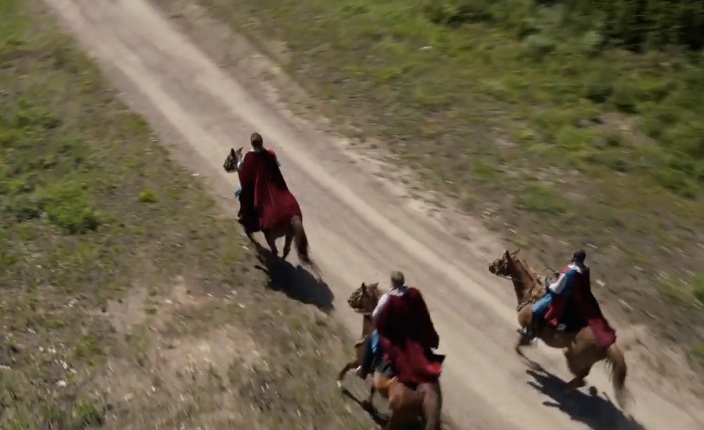 4 | On Once Upon a Time, is stringy hair a requirement of being The Dark One? Does your hair get cursed, too? And are we to assume these distinct Camelot tire tracks were left by… horse-drawn carriages?

5 | Has any series ever worked as hard to make you loathe a character as Fear the Walking Dead did with Moyers? On the flip side, doesn’t Nick’s smooth-talking cellmate remind you of the Most Interesting Man in the World?

6 | Did Masters of Sex‘s strong Season 3 finish — particularly the sublime final two episodes — make up for the uneven beginning and middle? And after this season, are any fans still rooting for Bill and Virginia — aside from in a “You deserve one another!” kinda way?

7 | About that Castle break-up: Are we to believe that a ruthless, super-covert cabal cares if their No. 1 target is recently estranged from her husband vs. happily wed?

9 | Was Tank’s Switched at Birth return a satisfying wrap-up to that storyline? Or would you have preferred the alt ending, in which Bay asks Toby to check in on him?

10 | How did it sit with you that Chasing Life‘s April invited Dominic on what was supposed to be her honeymoon trip with Leo? And in light of the show’s axing/Italia Ricci’s availability, we wonder: Does Felicity Smoak need a gal pal?

11 | Is it time to get concerned about the so-so talent level on The Voice Season 9, or should we wait ’til Blind Auditions are over before we hit the panic button?

12 | Which season premiere pulled off the Sliding Doors twist better: Bob’s Burgers or The Mindy Project? Speaking of Mindy, did we somehow miss her wedding to Danny? Why did he keep 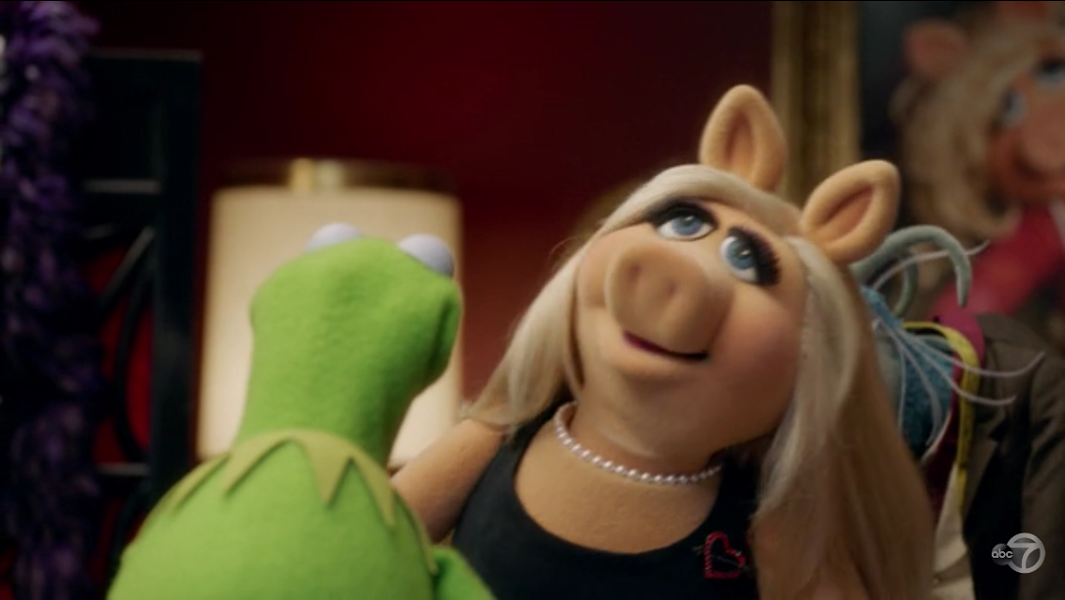 referring to her as his wife?

13 | Do we need professional help* or did The Muppets‘ Miss Piggy look kinda hot this week? (*Always a possibility.)

14 | Between Boyz II Men’s “End of the Road” (on Fresh Off the Boat) and the Backstreet Boys’ “Everybody” (on Scream Queens), hasn’t it been a great week for ’90s music? On a related note, which one of Eddie Huang’s classmates cracked you up most: the “history dress” kilt-wearer, the Mask impersonator 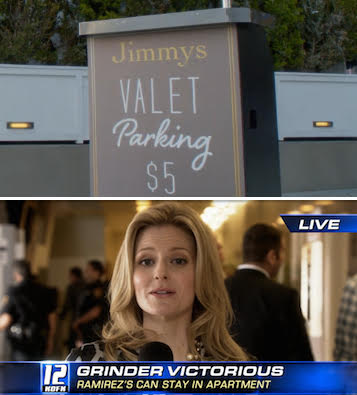 15 | Which Fox comedy typo irked you more — Grandfathered’s restaurant name (unless there is a co-owner also named Jimmy), or The Grinder’s pluralization snafu?

16 | The Middle’s Axl sure took his sis to the cleanest and quietest college pizzeria ever, right? 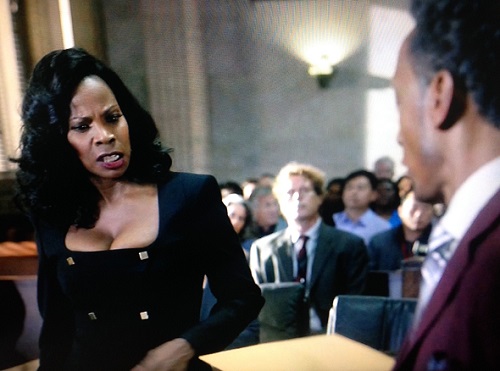 17 | Is Empire‘s D.A. showing off way too much cleavage for court? And how is it that Kelly Rowland could play Lucious’ mom after Hakeem referenced Destiny’s Child in the same episode?

18 | What was your favorite part of Modern Family’s unsellable house — the 5/8 bathroom? How stepping into the basement deposited you back on the first floor? And is this the season that the show’s secret weapon, Sarah Hyland, might finally get Emmy buzz?

19 | Hayden Panettiere’s slightly tipsy, wholly bitchy delivery of “Cheeeeers… ” at the end of Nashville‘s cold open qualifies as the TV moment of the week, right? And TVLine reader Kim asks: “How does Rayna” — who was surprised to run into Deacon in her bedroom — “never seem to know if Deacon is home? Does she not park next to him? Does he Uber everywhere?”

20 | TVLine reader Donna asks: “How could Sleepy Hollow‘s Ichabod go back to Scotland? Did he somehow get a passport?” And would you pay money to see a web series about Ichabod’s five days in the clink?

21 | For a group of people utterly convinced that they were in possession of Booth’s remains, shouldn’t Bones‘ Jeffersonian team — particularly Hodgins and Angela — have been more upset?

22 | As much as we usually love Grey’s Anatomy’s covers, can we agree that a lilting, acoustic version of “Shake It Off” — which is by nature a rousing, shouty anthem — simply doesn’t work? And as curious as you may be to meet Callie’s new GF, are you, like Arizona, deep down like, “Mmmm, nah”? Is April’s determination to fight for her marriage a case of “too little, too late,” or is Jackson a jerk for not wanting to mend things now that she is ready to? And cast your prediction: Is the new promo a fake-out? Is [possible spoiler] pregnant? 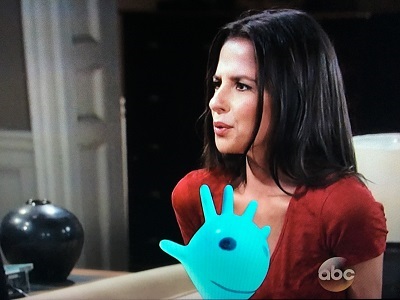 23 | How many actors have to be groped by Dr. Ken’s surgical glove before ABC rethinks its pop-up ad strategy?

24 | Who would you like to see cast as Dominion‘s Lucifer? (Is Mark Pellegrino available?)

25 | Is How to Get Away With Murder revealing too much, too quickly in the new flash-towards? (That second body would seem to markedly narrow the list of suspects.) And after a whole year under Annalise’s tutelage, shouldn’t Michaela and Connor have been more suspicious of the cute guy in the courthouse asking to borrow one of their phones? 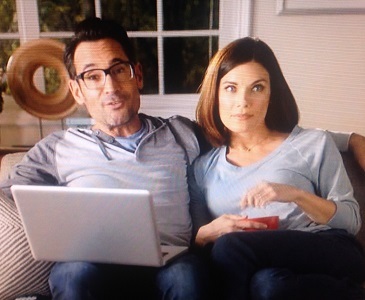 26 | If The Good Wife ever needs someone to play Alicia’s closest cousin, do they need to look further than the actress in this cable service ad?