Well, Dominion, that’s one way to end the Lady of the City’s reign.

Yep, Vega’s leader Claire Reisen was one of the many fatalities claimed by the Syfy series’ Season 2 finale, shot to death by Duma, the violent angel sharing a body with her father. (If you’re new to the show, now would be a good time to hit Google.) The hour also found:

* David Whele choosing to stay in the city where his son died rather than escape to relative safety in Helena with Arika. (Whele later was brought in front of the Duma/Gen. Riesen dyad, where it looked like things would not go well for him.)

* Alex performing a mass eviction for the first time, with those he saved going on to stick around and fight the 8-balls on his behalf.

* Lucifer, via the Prophet, ridding Gabriel of the darkness… and then later being revealed as needing Alex to complete his Voldemort-like return to corporeal form.

* Alex professing his love for Noma, who later reveals herself as being #TeamLucifer, thanks to the sweet new wings the Son of the Morning gave her.

TVLine caught up with series creator Vaun Wilmott to get his take on the packed episode, whether Claire is really and truly gone and what a possible Season 3 will look like. Read on for the scoop. 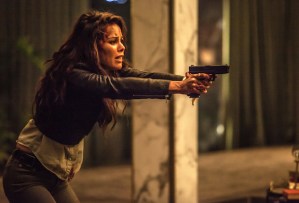 TVLINE | Claire is now — I was going to say “with the angels,” but that’s not a good euphemism for this show.
[Laughs] That’s not really a good place to be!

TVLINE | She was a character who grew considerably stronger over the course of two seasons. Was this trajectory always the plan for her?
The idea was always that in Season 1, I think of all the characters she has a really interesting arc in that in Season 1, coming out of the pilot she was just innocent and had these really lofty ideas and believed in freedoms and democracy and all the tthings that were almost, in this world, a luxury. And then once the split with her dad happened at the end of Season 1 and she was really thrust into the role of leader as Lady of the City, it became about how much the use and limits of power would change her and challenge her as a character. And would she become like her dad? So in many ways, I find her a very sympathetic character because she still had these ideas and these ideals she wants to implement but she’s bumping up against reality: the entrenched power of the V6s, the David Wheles, the angels outside the walls. There’s all these things that are basically conspiring her to stop her from actually making the world she would live in if she could.

TVLINE | William is dead, as well. Is this the last we’ve seen of Luke Allen-Gale?
William, interestingly, this is the example of a character that I think could live again, could come back, we could see again in some kind of a supernatural twist.

TVLINE | Speaking of the Wheles, it doesn’t look good for David in his final scene, but it occurs to me that this man always somehow gets out of terrible situations.
He very much is set up for some kind of a really difficult future. [Laughs]

TVLINE | We see Alex perform an eviction on a larger group of people than we’ve ever seen before. Is the thinking that maybe someday he can perform an eviction on the whole city?
We’re certainly toying with that, with this new escalation in his powers. The idea that we established in Season 2 is that he could be the great destroyer or the great healer. There’s so much locked potential in those tattoos on his body; we really don’t know the extent of what is really growing within him. 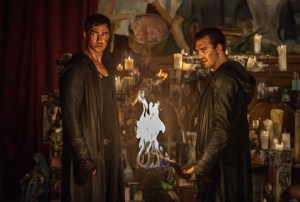 TVLINE | Lucifer rises from the muck at the end of the episode — we’ll see him embodied in human form in Season 3?
Yes, definitely. This teases it. We left it open in terms of, because of what you see in the pool, he’s definitely a man. He’s definitely a human, or humanoid. But it leaves it open to the actor you want to cast. But yeah, he’s the big bad in Season 3.

TVLINE | Let’s talk Noma and her betrayal. How far back did you know she would turn on Alex?
Interestingly, I originally revealed that she’s an angel in the pilot. In the end of the Season 1 [concept] document, they were actually leaving Vega, her and Alex, and we learn that she is in league with Gabriel. Now, that’s not how it played out, so that was always in my mind that that story was in her past, that at one point she was on Gabriel’s side. Probably once we knew, midseason, that she was gonna rip off her wings to save him, I knew that was going to change her and really challenge her, and almost break her in a way that caused her personality to be affected and her loyalties and her path…

Once we hit on that the darkness was going to be in [Episode] 11 and that was going to unlock a person’s worst nightmare, then it all fell into place. We knew that hers was going to be getting her wings back, and she’s not going to want to lose them a second time, and what does that mean for when she comes out of the darkness? And then in [Episodes] 12 and 13, we built out that whole backstory where we learn about the day that the Seventh Seal was broken and then we learn that she was in league with Gabriel, and then all these big secrets started coming out.

TVLINE | How will her betrayal affect Alex? We hear him saying that he’s fallen for her earlier in the episode.
It’s going to be really heartbreaking and a huge betrayal. Of course, the big whammy — besides this — is that she was the one that actually killed his mother. That’s a secret that could shake everything to its core… Also for her, does she know what the extent of this deal means? Does she know that she was getting her wings back to turn him over to be sacrificed?

TVLINE | This season split the action among several locations: Vega, New Delphi and Mallory. Would next season follow suit, or would you pull all the characters together again in one place, like Season 1?
I really enjoyed our storytelling this season. It opened up the world and allowed the characters to occupy their own space and their own parts of the world as well as tell really unique stories to each character. I’d like to continue with that model.

TVLINE | Can you imagine a Dominion where the characters abandon Vega because it’s so literally godforsaken?
[Laughs] Oh, definitely. Yeah.

TVLINE | Will action possibly take place in Helena next season?
One of the things that really worked well for us this season was opening up New Delphi, and having that new character Julian as the new villain… I would hope that we could do Helena in the same way we did New Delphi this season.

TVLINE | How are you feeling about the show’s renewal chances?
Right now, we’re waiting to hear… I know they are very happy with the show creatively, they have really supported me and the show. The numbers will come in, and we’ll hear. As of now, I don’t really have an inkling. I’m hopeful.