If you feel the need to take an extra long look at the above picture of Booth’s happy family on Bones, we totally understand. The joyous feeling seen on the clan’s faces stands in opposition to the somber, stressful vibe of Thursday’s Season 11 premiere.

As the episode opens, we discover that Booth and Brennan stayed put in their home even though they left their old jobs. Since we last saw them in Season 10, she’s written two books already and is helping classify artifacts for the Munich museum, while he’s working as a freelance instructor at the FBI. Or so Booth says.

After bidding goodbye to his brood with a lingering, heavily loaded look, he disappears — as in goes missing for days. Meanwhile, the Jeffersonian discovers a body, and all the evidence points to it being the G-man. Brennan, of course, is reluctant to accept that the remains are her husband’s — even as Angela IDs the gun found at the scene as Booth’s. The remodeling on the bones, too, is consistent with the injuries Booth endured from his abusive father.

Brennan insists on examining the remains by herself. “We left all this behind. It can’t be him. It just can’t,” she tells Angela.

She’s right to be in denial — the body is actually Booth’s brother, Jared, which explains all the similarities — and you better believe her temporary replacement Arastoo and Cam get a mouthful from Brennan on the Jeffersonian’s quality of work. 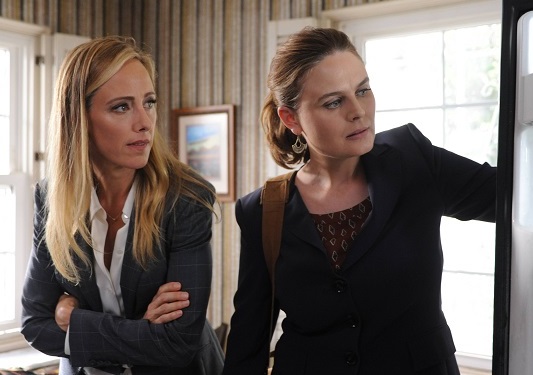 FBI agent Grace Miller (played by 24‘s Kim Raver) is brought in to investigate the case, and it turns out Booth is her No. 1 suspect in Jared’s Murder. After visiting Jared’s wife, they discover that a friend, not Booth, was helping troubled Jared get his life back on track. The influx of cash, however, was coming from Booth, which means he was either helping his brother or planning something with him, making him an accessory to whatever criminal acts they were undertaking, Miller points out.

So where is Brennan’s missing other half? He’s with Jared’s pals, robbing a house — and practically bleeding out from a stomach wound! On the scene, the team also discovers an expertly shot-to-death man. And with that, the action is To Be Continued.

On a break from filming the upcoming Bones/Sleepy Hollow crossover, star David Boreanaz talked to TVLine about the impact of Jared’s death on Booth, the “intense” second half of the season opener and the state of Booth and Brennan’s marriage.

TVLINE | They killed off your brother, poor Jared — and offscreen, too! What was your reaction?
I know! You have to able to adjust on the fly and do things that make sense for the story. I think it’s fine. You have to continuously change things up by killing characters. I don’t think anyone’s safe. My character’s not even safe on the show. One of the hardest things is to be able to make that change. So no, it was good. I didn’t mind.

TVLINE | I always hoped they would bring Brendan Fehr back as Jared for an episode. I guess that’s out of the question now.
Unfortunately, he’s done. He’s history. Flashbacks maybe.

TVLINE | How is Booth dealing with the loss?
It’s weighed a little bit on him because he couldn’t help Jared out when he was alive – and he can’t even help him out when he’s dead. It’s a struggle for Booth to get that and something that he’ll come to grips with… and maybe affects his journey this whole season.

TVLINE | He was keeping this from Brennan, that he was trying to help Jared. Does that create any tension between them?
[shakes head] There’s an understanding at the end of the [next] episode where she gets why they need to go back to their jobs, so to speak. So there’s a reason for it.

TVLINE | I was surprised to discover they left the Jeffersonian and the FBI, but they didn’t actually move away.
They’ve got a nice house in the woods! They might as well stay there.

TVLINE | How quickly are they back at the Jeffersonian?
It happens pretty quickly. It’s not like an ongoing arc. [Booth will] reevaluate where he stands now in the FBI and how Aubrey has moved up and how annoying that is. He doesn’t have his office. There’s some funny stuff coming up.

TVLINE | He’s below Aubrey now in the ranks?
Yeah. I’ve got to go through all the retesting and shooting and evaluations to get reinstated.

TVLINE | Is he happy to be back at the FBI?
Yeah. He’s happy. The character thrives off saving people and helping them. 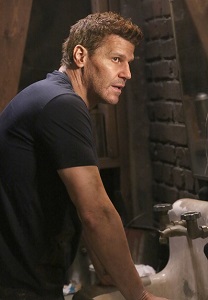 TVLINE | At the end of the premiere, you’re bleeding and you’re with these guys who have just robbed a house. What can you tease about the next episode?
The second half is much more intense in terms of trying to find out why he’s in that predicament. There is a great end to that episode that reflects the connection between him and Bones.

TVLINE | What kind of trouble has Booth gotten himself into?
So many things. He’s got a life. A lot of secrets.

Bones fans, what did you think of the season premiere? Grade it via the poll below, then hit the comments to back up your pick. 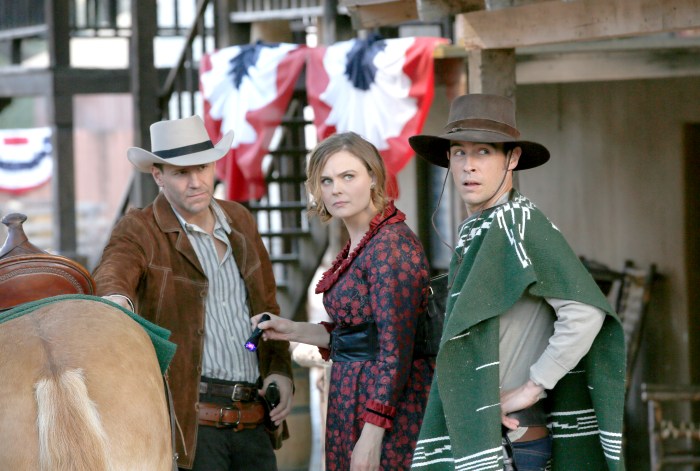