The following recap, by the very definition of the word “recap,” contains spoilers from Part 2 of the Castle Season 8 premiere.

Castle‘s season-opening Bracken-related conspiracy took the lives of five of Kate’s former D.C. colleagues, left the disgraced senator himself a bloody corpse and put numerous others in harm’s way.

But one casualty perhaps no one saw coming out of this two-parter was the relationship at the ABC series’ center, as Kate broke up with Rick in Part 2’s closing scene.

Following Castle‘s West Coast airing, I posted an exclusive Q&A with showrunners Alexi Hawley and Terence Paul Winter, who explain the impetus for this “bold twist” as well as offer good reason to stay tuned in throughout the weeks ahead. Now, to recap….

STEPMOM’S THE WORD | In Part 1 of the premiere, Rick was left to wonder where Kate had run off to, and how she was injured, after lying to him about a meeting with Deputy Chief Gates. Part 2 opened with Kate and AG tech analyst Vikram Singh holed away in an abandoned property, just as Brooks and his backup team of baddies were stealthily sneaking in. Thanks to a trap set by Kate, she and Vikram got wind of the intruders and made a run for it through a basement escape route, only to wind up cornered — until shots rang out from nowhere, saving their bacon. Their savior: a woman named Rita aka Jackson’s Hunt’s wife of almost 10 years… aka Castle’s (classified!) stepmother.

When Rita asks for an account of all that has happened, we learn what was going on with Kate and Vikram parallel to the events shown during Part 1, starting with his frantic call, which she passed off to Rick as a telemarketer. Kate then met up with Vik at the theater, where the first shoot-out with Brooks’ first hit squad took place, wounding Kate. Next, they swung by the dry cleaner so Kate could sew (…and sew, and sew, and… blech, I’m dizzy) herself up, while Vik revealed that a keyword search Kate submitted during her time at the AG had finally coughed up a result, a document that had accidentally been declassified and was heavily redacted but hinted at a meeting between Bracken and a high-ranking federal official. There was also the word LOCKSAT scribbled in the margin. When Vik forwarded the odd file along, McCord and her team were snuffed within 12 hours.

BRACK IS BACK | After pinching insulin from some EMTs, Kate pays a visit to incarcerated Bracken, and even the mighty manipulator himself blanches when Kate mentions LOCKSAT. Bracken in fact not only warns Kate that she has gotten way, way, way in over her head, he’s amazed she hasn’t been killed already!

Kate tasks Vikram with using a bar’s wifi to hack into the AG database and retrieve the document that triggered this hit on Beckett, as a means to draw out the hit team that is after her. Vik narrowly escapes, while Kate follows the killers to the warehouse where she would eventually help rescue Rick. Back in the present, Rita suggests that the federal official named in the document was Bracken’s partner, someone who used CIA resources to get his and Vulcan’s drugs into the country.

A crossed-out tail number listed beside the LOCKSAT name leads Kate and Vikram (whom we have been led to wonder might be a bad guy) to an airfield, where she has a standoff with a pilot. With Alexis having also obtained the “LOCKSAT 2011DB” info (off a surveillance cam that was behind Vik at the bar), Castle and Hayley arrive on the scene just as Vikram guns down the pilot before he can shoot Beckett. Kate and Rick embrace, but it’s far from over yet.

SECRETS & LIES | Back at the 12th, Rick presses Kate about keeping secrets, about keeping him out of the loop during this crisis. She’s sorry, but while he was worried for 36 hours, she reminds, she fretted over his own vanishing for eight weeks. Rick kinda sees her point, but says the larger issue is something he is seeing in her, a reignited obsession.

Meeting up at the P.I. office, Rick, Kate, Alexis and the boys decide to draw out the hit squad. To that end, Rick plants a fake news lead at the local TV station, allowing Brooks to tail him. When Brooks and his partner arrive, RySpo emerge from the safe room to taze them. Alas, some third goon then escorts Hayley in, with a gun aimed at her head. Rick uses the gizmo built into his desk to pop out a pistol, grab it and take the gunman down. Afterward, it is discovered that Assistant AG Allison Hyde is part of the conspiracy — and is now dead, seemingly having taken her own life in a hotel room. Though Kate and Vik know better.

Afterward, Alexis says goodbye to Hayley, whose next case is in Chicago, while Kate privately meets up with Rita, who commends her on a job well done but warns that if Beckett insists on finding out who Bracken’s super-powerful partner was, she will put Rick and any other loved ones squarely in the cross hairs. Kate, though, confesses that she cannot let this go, even though, as Rita notes, any blood shed from here on in is on her hands.

As such, Rick’s jovial preparation of “breakfast for dinner” —  s’morelettes — is tempered by his sight of Kate’s packed bag. 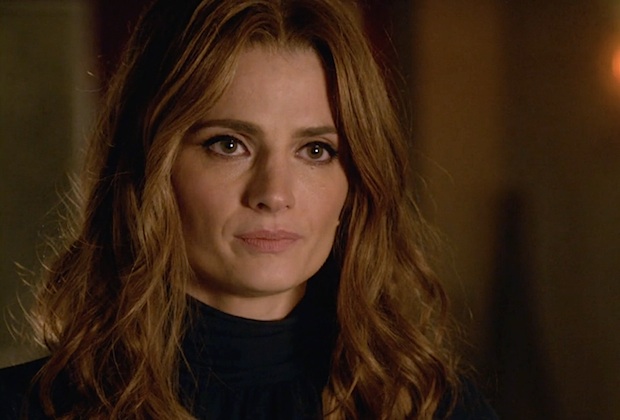 have to get my head right, I have to figure some things out so that we can have a ‘happily ever after,'” she sorta explains. Rick reminds his missus, “If you have a problem, we have a problem. That’s how this works.” Kate though implores him, “I need you to trust me now, I have to do this on my own. And when it’s done, I hope you have it in your heart to take me back.”

Rick relates how Bracken taunted him with the idea that Kate’s obsession with her mother’s murder and all that orbited around it would ultimately consume her, and their marriage. “Please do not tell me that sonuvabitch knew you better than I do,” he begs. But all Kate can meet him with is another “I love you, I always will.

“Forgive me,” she asks quietly, before stepping out into the hall, her face first in tears, then washed over with resolve, while Rick is left gobsmacked by the turn of events.

Once again: I have an exclusive post mortem Q&A with the Castle bosses. Now share an opinion or two here in the Comments.