By the end of Quantico‘s premiere, we don’t know much about an at-large newbie FBI agent involved in domestic terrorism, but we do know this:

He or she is one good-looking criminal.

The ABC drama debuted Sunday (10/9c) with an episode that — via some acrobatic time-hopping — both introduced the fetching members of the FBI academy’s newest class and showed us the destruction caused when one of them, as a fledgling agent, stages the worst attack on America since Sept. 11.

In a moment, we’ll want to know what you thought of the episode. But first, how about a recap?

We’re brought into the action via Alex (Bollywood star Priyanka Chopra), who within the first few minutes lies to her mother about her destination, has car sex with a hot stranger she meets on a plane and then rebuffs said stranger’s attempts to see her again. Her reasons for the brush-off? She knows — via what seem like spot-on profiling skills — that he’s lying about who he is and where he’s been. He still wants to know her name. “Guess you’ll never know now,” she purrs.

… Except he totally will, because they’re both members of the new class at Quantico, which we watch assemble for the first time. Thanks to one of the recruits’ first tasks — to find out dirt on each other — we learn a lot about them in a very short time. In addition to Alex, the key members (and their secrets) are: 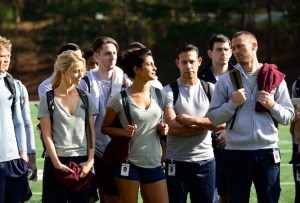 * Shelby (Johanna Braddy, UnREAL), a trust-fund orphan who’s a sharpshooter and whose parents both died in the Sept. 11 attacks

* Caleb (Graham Rogers, Revolution), a cocky legacy recruit who seems to have gotten into Quantico solely because both of his parents are agents

* Nimah (Yasmine Al Massri, Crossbones), a Muslim woman who — unbeknownst to the rest of the recruits — is sharing her spot in the class with her identical twin sister

When it comes time for the newbies to interrogate each other/reveal each other’s secrets, Caleb’s subject — Eric, a Mormon whose religious mission took him to Malawi — pulls a gun and absolutely loses his mind as he desperately tries to keep Caleb from saying what he knows.

As it turns out, Eric’s hiding the fact that he got a 14-year-old girl pregnant in Malawi and she died while having an abortion. He commits suicide in front of the whole class; a shaken Caleb is gone from the program soon after.

Oh, and Alex’s secret? She shot her father, killing him, when he got drunk and violent with her mother. Only after his demise did she learn that he was secretly working with the FBI. She confesses this to O’Connor — alone — after Eric’s suicide.

We learn all of this in flashback; the premiere begins and ends in the aftermath of an explosion at New York City’s Grand Central Terminal, a terrorist act in which Alex was nearly killed… and for which the FBI suspects she is responsible. In a flash, the young agent is handcuffed and tossed in the back of a prison-bound van, all the while shouting that she’s been framed. (The explosives — and Ryan’s unconscious body — found in her apartment don’t help her case.)

Alex’s only reprieve comes in the form of Quantico director Miranda Shaw (Aunjanue Ellis, The Mentalist), who intercepts her prison transport and helps Alex escape, instructing her to investigate her classmates to find the real terrorist among them. (Side note: It was right around this point that I decided this show is bats—t, but probably in a good way.)

Who’s really behind the bombing/Booth’s shooting? Is Alex as trustworthy as she seems? What’s O’Connor’s deal? And how did they pack so much pretty into one cast? All of these are questions I’m looking forward to exploring as Quantico continues its freshman run.

That’s what I thought, but now it’s your turn. Grade the premiere via the poll below, then hit the comments to back up your pick.