It’s been a cruel summer for Nashville fans, but all of that candle-lighting, vigil-holding and praying to St. Tammy Wynette turns out to have been worth it: Deacon Claybourne is indeed alive, well and living in Music City.

His sister, Beverly, who so selflessly (yet somehow also rather bitchily) donated part of her liver so her brother could go on? Well, she’s not doing so great — though she’s not yet singing backup for Hank Williams, so there’s that.

Elsewhere, Juliette’s got Oscar buzz (and inner turmoil), the newly out Will feels like he doesn’t belong anywhere, Gunnar and Scarlett sing and cry and Daphne tries sass on for size.

Read on as we review the major developments of “Can’t Let Go.”

LONG LIVE DEACON | Let’s handle the most pressing matters first: Deacon not only survived that scary moment in the operating suite, he’s recovering quite nicely from his liver transplant. But the show teases us a little in the very beginning of the episode, making Rayna seem vaguely sad and showing her going to bed alone… but it’s just because Deke spent the night at the hospital by Beverly’s bedside! (Side note: I am very interested to know who among you actually feared that Deacon was done for. You can admit it in the comments. You’re among friends.)

Everything we’re watching is happening a month after the events of the finale, a time span Bev has spent hooked up to a ventilator… and under the care of a very misguided hairdresser? Seriously, what’s with her clipped locks? Is this a we-had-to-shave-her-head-for-an-operation thing? (If you have any medical training and/or an idea of what’s happened here, leave a comment.) We learn that she hadn’t been completely honest about some supplements she was taking for menopause, which thinned her blood and made it harder for doctors to control the damage when things went south.

Rayna comes to the hospital to keep Deacon company. I feel like, even though there’s a comatose woman in the room, we should revel in every hug, kiss, casual touch, adoring gaze, “babe” and the like between Rayna and her man. YOU NEVER KNOW WHEN THIS SHOW IS GOING TO TAKE IT AWAY FROM US AGAIN. Rayna tells Deacon she’s heading to Los Angeles (for reasons we’ll deal with in a moment), and he volunteers to keep an eye on the girls while she’s gone.

Later on, after some bedside crooning and a bit of self-blame for her predicament, Deacon is overjoyed when Bev grasps his hand and seems to know what’s going on — though she still can’t talk, thanks to the ventilator she still needs. He later tells Maddie that he’ll marry her mom when Beverly is better, so she can be part of the proceedings. Daphne, who believes Teddy is innocent and earlier played the “you’re not my dad” card with Deke, overhears and seems perturbed about the whole situation. 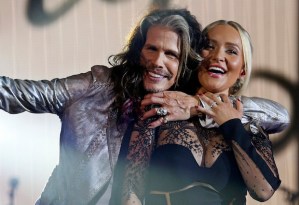 ‘GIRL, YOU BREAK MY HEART’ | Now, about Rayna’s hasty trip to the West Coast: No sooner has Big Red signed the papers releasing Juliette from her Highway 65 contract than she gets a phone call from a sobbing, drunken Juliette who has just coughed up her dinner (and about 3 gallons of booze, I’m estimating) into her hotel room’s commode. Poor Ju is clearly in trouble — she’s so upset, she’s barely making words into the phone — hence Rayna’s worry that the new mom could use a friendly face pronto.

To the rest of the world, though, Juliette Barnes is riding high. Her Patsy Cline movie, Shenandoah Girl, is generating Oscar buzz — though even that, surprisingly, isn’t enough to get Noah West to make an appearance at his own film’s premiere. She duets on stage with Aerosmith frontman Steven Tyler. (An odd cameo, but it didn’t interrupt the flow of the story, so I’ll allow it.) And she has such pull with Jeff that she gets Layla — still also repped by/sleeping with the Smirky Turtle — bounced from the City of Angels just because she annoys Juliette. (Sample dialogue, courtesy of Ms. Barnes: “You’re in bed with Jeff Fordham, literally? You must hate yourself.” Heh.)

But when Rayna shows up and — with one withering glance at Juliette’s new hanger-on/”best friend” discerns exactly what a mess this whole situation is — Juliette claims her cry for help was only “a butt dial.” Ray knows that’s not the truth, but Ju refuses to engage… though make sure you rewind to watch her face when she realizes that Rayna isn’t putting up a fight about her leaving the label. That’s one sad girl right there.

After a few attempts to get Juliette to say what’s wrong fall flat, the new mom shows her surrogate mom the door. “You break my heart, girl. You really do,” Rayna tells her, disappointed. Right there with ya, Ray.

SAME STORY, DIFFERENT DAY | Gunnar and Scarlett haven’t talked much since that night on the roof, and the first substantial conversation they do have turns into a makeout session that she abruptly stops. “You make me feel like somebody I don’t want to be,” she says, citing Caleb as someone who makes her feel safe. Later in the hour, Scarlett declares her love for the hot doc, while Gunnar forlornly records his portions of their harmonies all by his lonesome.

GOODNIGHT, SWEETHEART, WELL IT’S TIME TO GO | Someone needs to catch Will up on gay slang: You’re supposed to cultivate a beard when you’re still in the closet, honey, not right after you come out! But yes, in the aftermath of him declaring his sexuality, Mr. Lexington and his bushy facial hair are hiding from the world. He eventually decides to shave (thank GOD) and go out for a nice dinner with Kevin, which turns into a night at a gay club — neither of which make Will feel normal or welcome, so he bails.

The next morning, he and Gunnar are bemoaning their love/life troubles over breakfast at the house when Avery returns from Ohio with Cadence — who’s even cuter than she was last season — in tow. Gunnar’s all, “Oh right! We have a new roommie!” “Two, in fact,” Avery adds. And if Nashville is taking inspiration from Three Men and a Baby, I’m totally OK with that.

Now it’s your turn. Grade the season premiere via the poll below, then hit the comments with all your Nashville-related thoughts!