It’s a big week for the New York City subway system: First pizza rat trends on Twitter, then Leo Castellano makes his grand entrance (or starts to, at least) on a downtown 2 train.

Yep, Mindy gives birth in this week’s Mindy Project, which finds the very pregnant Dr. Lahiri caught in a NY transit tunnel just as her water breaks. Don’t worry: The Deslaurier midwives, plus a very unhelpful Morgan, are there to coach her through the process. But will Danny arrive in time? Read on as we review the action in “C Is for Coward.”

CLASH OF THE OB/GYNS | After an intro that reveals Danny’s aversion to having sex with his full-term fianceé (“I don’t want my special guy so close to my special guy”), we find out that Drs. L and C have — shocker! — opposing views on how a birth should go down. She’s opting for a C-section and drugged oblivion at a posh birthing suite. He’d prefer a natural birth, with mom and baby wide awake and fully aware of everything that’s happening.

After consulting with the hilariously granola-crunchy midwives, who have a new book about “Paleo Birth” (heh), Danny tries to trick Mindy’s body into going into labor by plying her with a mix of spicy foods, red wine, massage and sex. It’s all going according to plan until Mindy finds the book and shuts it all down. (And here’s where, even though I know this is a comedy and I should just go along with it, I wonder at everyone’s motives: Is Danny truly that bullheaded to believe that his lady — an OB herself — isn’t informed and empowered enough to decide the best way for her to go through labor and delivery? And is Mindy really convinced that being conked out for the whole shebang is beneficial for everyone involved?)

TUNNEL VISION | The next morning, Mindy, Morgan, Tamra and Beverly are on their way to a fertility expo when their subway train runs into trouble and gets trapped in a tunnel underground. Of course, Brendan and Duncan are also on board… which is good, because Mindy’s water breaks in the middle of the car.

At the same time, Jeremy points out to Danny that Mindy’s only choosing to be knocked out for the birth because she’s so afraid. And Danny realizes the Brit is right — just as Morgan texts him to let him know that his son is about to be born. So Danny does one of his usual Castellano runs through the city — and into a darkened subway tunnel, which, shudder — to make it to the car in time to reassure Mindy that she can do anything because she’s a “stone cold bitch” who’s even tougher than Ma. 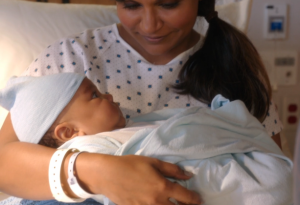 Next thing we know, Mindy, Danny and their son are tucked up in a hospital room, with both parents gazing adoringly at the infant. (Side note: Cheeks for weeks on that kid! Delicious.) “He’s definitely the best thing I ever cooked,” she says, a huge smile on her face. They name him Leo, and then Morgan comes in and is a big goofball and all is right with the world.

Thoughts on Mindy’s big birth episode? Sound off in the comments!