Nearly 15 years after Freaks and Geeks ended its one-season run on NBC, James Franco is slipping back into Daniel Desario’s iconic skater hat for the second season of his mashup-centric AOL series Making a Scene.

“One of the great things about [Making a Scene] is that I don’t choose the shows we mash up,” Franco tells TVLine. “People wanted Freaks and Geeks, so we had to give it to them. It sort of added a layer of weirdness to have me in it, but it’s not like we’re taking what we’re doing very seriously, so I was happy to take on the role of Daniel again. There wasn’t much pressure.”

Unlike the first season of Making a Scene, which found Franco’s team mashing up iconic scenes and themes from the big screen, Season 2 of the AOL series — which officially premiered online Wednesday — is all about TV shows.

Below, Franco discusses a few of the shows getting the Scene treatment this season, including Gossip Girl (as a western) and Game of Thrones (as a sitcom), and tells us where he thinks his Freaks character might be today.

TVLINE | Why TV this time around?
We really just wanted to shake things up. Instead of doing more top-20 or top-40 favorite movie scenes, why not go into television? It seems like so many people are watching television now. We could stick with the same concept from Season 1, but have fresh material.

TVLINE | Were there any shows you knew nothing about?
There were definitely some I was more familiar with than others. I haven’t watched much Sex and the City, though I’m pretty aware of what it’s all about. I also haven’t watched much Gossip Girl or That ’70s Show, but I was very up on Breaking Bad and Game of Thrones. 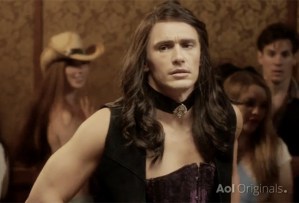 TVLINE | If I were to ask you what Gossip Girl is about, what would you say?
[Laughs] Oh, man… Well, I did go back and watch a few episodes, but if you asked me what it was about, I’d say … girls gossiping? About boys, and each other? Our Gossip Girl happens to be a western, so it’s less about spoofing the show and more about trying to make sense of the mashup.

TVLINE | Since you’re also doing Freaks and Geeks this season, have you given any thought to where Daniel Desario might be today?
I remember Paul [Feig] and Judd [Apatow] saying that, if the show went on, we’d have to graduate. Daniel could probably stay back a couple of years, but he’d have to graduate eventually, then probably just drive the pizza truck around town. I’d like to think he kept his punk ambitions and played in a band.

TVLINE | Which mashup surprised you the most?
Game of Thrones got mashed up with a sitcom, so it kind of became this Thrones-meets-Modern Family situation where I talk to the camera as Jon Snow, doing very un-Jon Snow-like things. That’s probably the weirdest one, but also the best.

TVLINE | And you said you’re a big Thrones fan?
Yeah. I’ve been binge-watching a lot of TV recently; I watched all five seasons of Game of Thrones, and it didn’t even take me long.

TVLINE | Well, since you play Jon Snow, what did you think of his death?
[Laughs] What a bummer, huh?