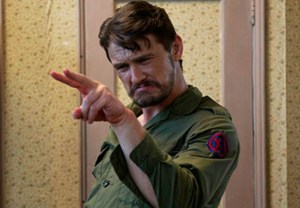 Some things, like peanut butter and jelly, were made to be mashed together. Other things, like Dirty Dancing and Reservoir Dogs, not so much. For his latest project, James Franco is focusing on the latter.

Franco has teamed up with AOL for Making a Scene, a series in which his team creates cinematic mashups, either by combining two films or taking a film and tweaking it to a different genre. Scenes were submitted to Franco’s Twitter and Instagram, and Franco tells TVLine that one general trend among submissions took him by surprise.

“They were all pretty famous scenes, but I was slightly surprised that there weren’t any from movies earlier than the mid-70s,” he says, though he acknowledges that an online-only submission process was likely to yield a younger crowd.

And although Franco admits “they were all weird” to him at first, only one submission actually concerned him: Wayne’s World.

“It was mainly because Wayne’s World already started as a comedic sketch, and it even sort of uses pastiche like we are,” Franco explains. “I thought, ‘This might not work with what we’re doing because they’re already doing it.’ So we just made it even more meta in a way.” (Side note: Franco says he still hasn’t seen that final cut.)

Still, despite a few concerns during the creative process, Franco says the only thing he would change about the finished product is the amount of censoring. More specifically, he wouldn’t have any at all.

“When we were making these episodes, [AOL] asked me to do some versions without swearing, but it’s never as funny,” Franco admits. “It’s like Seth Rogen — look at This Is the End, which was rated R, and look at Green Hornet, which was PG-13. It’s like taking Seth’s secret weapon away; if you can’t swear, it’s lame. What’s the point? So I just went with it, and if they want to censor it, it’s on them. They’re making it less funny, I guess.”

Episodes 1 — 4 of Making a Scene are currently available for streaming on AOL.