And despite what you might’ve heard, the new Late Show features the same Colbert that flew off into the moonlight with Santa Claus and Alex Trebek when he wrapped the iconic Colbert Report in 2014.

He’s no longer playing the role of narcissistic conservative pundit, but he’s still as gleefully narcissistic and quick-witted as ever.

Following a cold open Tuesday, which found the host singing along to “The Star Spangled Banner” with a variety of strangers across the United States before being told by little league umpire Jon Stewart to “play ball,” Colbert practically skipped to his place on stage, eager to put on the best first show possible. 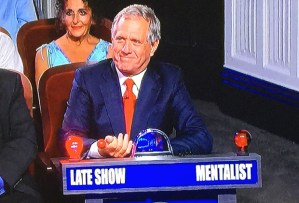 After being warned by CBS prez Leslie Moonves about the potential of being replaced by the same Mentalist reruns that kept his 11:35 pm time slot warm all summer long, the show truly began, first with a lively animated opening title sequence with Colbert as his own announcer, then by bringing the funnyman to his new desk — a desk, he notes, was carved out of a single piece of desk.

Before he got down to business shilling hummus and taking down Donald Trump’s recent comments about Oreo-manufacturer Nabisco, he took a moment to thank the man who kept The Late Show going day-after-day for 22 years. And after thanking Biff Henderson, he also thanked David Letterman:

“It’s possible to lose sight at how much Dave changed comedy,” he said. “The comedy landscape is so thickly planted with the forest of Dave’s ideas, that we sometimes need to remind ourselves just how tall he stands. So just for the record, I’m not replacing David Letterman. His creative legacy is a high pencil mark on a doorframe that we all have to measure ourselves against, but we will try to honor his achievement by doing the best show we can, and occasionally, making the network very mad at us.”

What followed in subsequent segments mirrored what we’ve all come to expect from standard late-show fare, including interviews (and taped gags) with George Clooney and POTUS hopeful Jeb Bush, and a rousing performance of Sly and the Family Stone’s 1968 classic “Everyday People” by infectious house band Jon Batiste and Stay Human, alongside some very special guests.

And check out this extended bonus clip of Colbert and Bush, a gem of a segment that didn’t make it to air:

Browse our gallery for a selection of best moments, then head to the comments and let us know what you think of the (allegedly) new Stephen Colbert. (We expect your whole truthiness, and nothing but the truthiness!) Then grade the premiere in our poll, and decide whether the new Late Show deserves a tip of the hat, or wag of the finger. 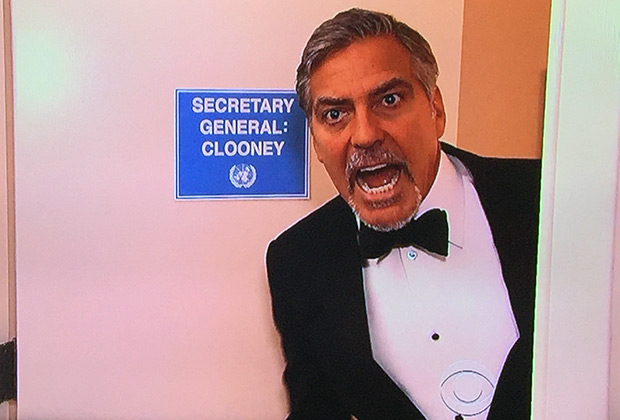