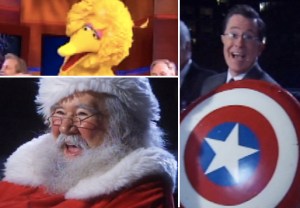 “If this is your first episode tuning into The Colbert Report, I have some terrible news,” he told viewers. “This is your last time watching the Colbert Report … until 10 years from now when they reboot it, directed by J.J. Abrams.”

After a quick recap of the latest Syrian shenanigans, Colbert turned to his viewers, his Nation, for a thanks-a-lot edition of The Word:

“While I’ve always reminded you to be afraid, folks, I don’t want you to worry,” he began. “On my very first show, I told you truth doesn’t come from your head. It comes from your gut. … The truthiness is, all those incredible things people say I did, none of that was really me. You, the Nation, did all of that. … I just got paid for it.”

That’s when things got weird. Like, really weird. In fact, maybe it’s best if I just bullet the final episode’s remaining weirdness: 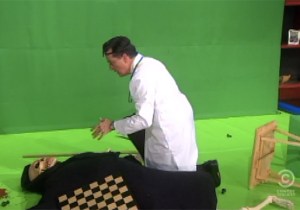 * Colbert’s beloved Grimmy met his demise, ironically, during an installment of Cheating Death with Dr. Stephen Colbert. (As a double dose of irony, Grimmy was done in using Colbert’s equally beloved handgun Sweetness.)

* An audience member also got shot, one last HR nightmare to squeeze in before the bitter end.

* Upon murdering Grimmy, Colbert declared himself a death-less god. Immortality, Colbert discovered, is “kinda lonely” and “a little snacky.”

* Speaking of getting “snacky,” Colbert also shared his bucket list which, as it turns out, is just a list of all the things he’d like to eat from a bucket. 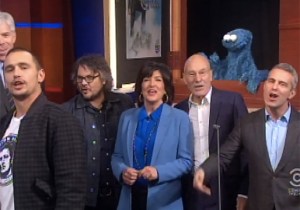 * Then came the celebrity cameos — the endless stream of celebrity cameos. Joining Colbert in a rousing performance of “We’ll Meet Again” were such personalities as Jon Stewart, Big Bird, Cookie Monster, James Franco, Katie Couric, Michael Stipe and J.J. Abrams. (And that barely scratches the surface; check out our weirdest-moments gallery for more famous faces.)

* That not enough for you? How about Colbert meeting Santa Claus, Abraham Lincoln — who is a unicorn, as we’ve always suspected — and Alex Trebek atop the roof of the studio, then flying off into the moonlight? Because that’s literally how it all ended.

Your thoughts on Colbert‘s final outing? Grade the episode below, then drop a comment with your full review. 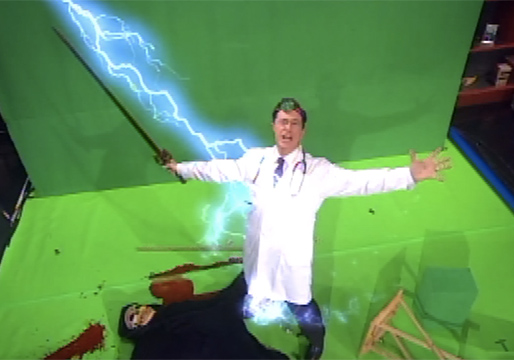