Remember when Mindy Project‘s Dr. L was engaged in a sizzling hook-up with one of her co-workers… and it wasn’t Danny?

Hard as it is to recall in the aftermath of hot airplane kisses and Empire State Building make-outs, Mindy’s original Shulman & Associates friend-with-benefits was Dr. Jeremy Reed.

“It’s so weird to think of that now,” says Ed Weeks, who plays the British OB-GYN. “Between the pilot and the second episode of the first season, there was definitely some rearranging that happened behind the scenes.”

Namely, Mindy-Danny became the series’ endgame and Jeremy was revealed as an insecure Englishman abroad.

Weeks? He’s cool with it.

“As an actor, it’s far more fun to play a character who’s flawed and who maybe thinks he’s a big deal but actually is not,” he tells TVLine. ” There’s a lot more comedy in that.”

This month is a big one for Weeks: In addition to Mindy’s fourth season premiere on Sept. 15 — the first since the comedy’s move to Hulu — he’ll also appear in the return of HBO’s Project Greenlight, a behind-the-scenes documentary of The Leisure Class, a film in which he stars.

We chatted with Weeks to get the scoop on Jeremy’s love life, additions to the Shulman & Associates staff and more.

TVLINE | When I was talking with [Mindy Project EP] Matt Warburton for our fall preview, he said that Jeremy wasn’t going to catch any breaks in Season 4.
[Laughs] It’s true. He’s unlucky in love, and personally, and professionally, and in every way. He’s having a hard time. But I feel like he’s also an optimist, and he’s just happy to be in America, where he feels he’ll find his pot of gold at the end of the rainbow. We’ll see. For me, as an actor, it’s a lot of fun to play when things aren’t going right for him, the poor boy. 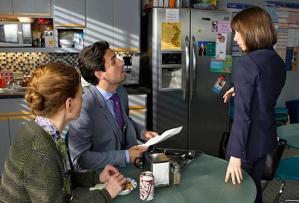 TVLINE | Cristin Milioti is coming back this season as Whitney, and we’ve heard she has some dark secrets. How might Jeremy handle that revelation?
In the beginning of Season 4, they are apparently in a full-fledged relationship. But the further we scratch the surface, the more we realize that it’s rather one-sided. Jeremy is possibly going a little overboard in how serious he believes it to be. There’s a sense that maybe Whitney is slightly using him. But of course, he’s hugely head over heels.

Whitney is such a fascinating alpha creature to Jeremy. I feel like Jeremy has always probably gone for women who treat him very badly. Probably as a result of a matron abusing him at boarding school and made him think that’s what women do: They humiliate you sexually and they slap your buttocks with a cold towel and tell you you’re pathetic and you’ll never amount to anything. That’s probably the only thing that arouses Jeremy. [Laughs]

TVLINE | What can you tell me about the new faces in the office, Garret Dillahunt’s Jody and Fortune Feimster’s Colette?
Jeremy, Jody and Collette all knew each other as children. Jeremy was once a foreign exchange student in Georgia and lived with Jody and Collette’s family. Of course the idea of Jeremy trying to be this young, Huckleberry Finn-esque [guy], dancing through long grass and fishin’ and crawdaddin’ and lots of things with an –in’ — I can’t imagine Jeremy was any good at any of them. But as a result, Jody and Collette, they have a lot of love for Jeremy just from the fact that they were all kids together. I imagine Jody had to protect Jeremy. They have a bond there.

TVLINE | Let’s talk Project Greenlight and the movie that’s being made this season, The Leisure Class.
The Leisure Class was a real fun departure for me. I essentially play an English con artist. At the beginning of the movie, he introduces himself as Charles Devonshire and he’s on the verge of marrying into this wealthy, uppercrust East Coast senator’s family, marrying the beautiful heiress to that family, played by Bridget Regan. Then on the eve of the wedding, a stranger arrives in the midst, played by Tom Bell. He turns out to be my brother from England and he threatens to reveal my secret that I’m not actually called Charles, I’m William, and I’m not actually from money… The movie turns into a dark comedy about the exposing of a lot of family secrets — mine and theirs. So I’m basically playing a con artist. I’m playing two characters in one.

TVLINE | And as part of that experience, we’ll see you behind the scenes on the movie on Project Greenlight.
Correct. Right from my audition, in fact. On the set of The Leisure Class, there was another set of cameras filming for Project Greenlight… It turned out to be really cool in a strange way. You get used to the [documentary] cameras alarmingly quickly. Now I can’t do anything unless there are at least four cameras on me, including having sex, which is probably why I’m single… [Laughs] And also, it helps make you less nervous when the actual film cameras roll… The good thing about having the documentary cameras on us all the time is we were so used to the cameras being on us, there was no real difference between “Action !” and “Cut!” We were always ready to go. It was a very singular experience. I can’t wait to see the documentary. I hope I don’t do anything too foolish.