Is Pernell Harris, the crooked judge who suddenly undergoes a religious conversion in Amazon’s Hand of God, losing his mind or tapping into the divine?

It’s a complicated question — and not one that’s answered by the end of the drama’s first episode (which, along with the rest of Season 1, premiered on the streaming video service Friday).

We want to know what you thought of the premiere, which was created by Ben Watkins (Burn Notice) and directed by Marc Forster (World War Z). But first, a quick rundown of the episode:

We first meet Pernell (played by Ron Perlman, Sons of Anarchy) after he’s gone missing for three days, when he turns up naked and speaking in tongues in a public fountain. His worried wife Crystal (Dana Delany, Body of Proof) meets him at the hospital, where Pernell demands to see their son, PJ, who’s hooked up to life support in another part of the facility.

PJ tried to kill himself with a shotgun but failed, leaving him brain-dead, but Pernell refuses to accept that his child is gone. And it’s alone in PJ’s room that the judge has his first contact with either serious mental illness or the will of the Creator — take your pick — when he hears his son’s voice instructing him to find justice for a crime done to PJ’s wife, Jocelyn (Alona Tal, Veronica Mars).

We quickly learn that Jocelyn was raped by a masked man during a home invasion, and the traumatic fallout from that event played a big part in PJ’s downward spiral. When pressuring the local police department yields no suspects, Pernell decides to search for the rapist himself, along with the help of a well-meaning but seriously misguided — and violent — ex-con named KD (Garret Dillahunt, Raising Hope). 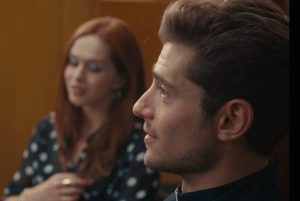 The epicenter of Harris’ spiritual awakening is the Hand of God Ministry, led by eager-and-shifty Rev. Paul (Julian Morris, Pretty Little Liars) and his comely-and-shifty significant other Alicia (Elizabeth McLaughlin, Betrayal). As Pernell becomes more involved with the pair, things become murkier. Are they, in a weird way, helping him? Or are they the grifters they first appear?

As the hour unfolds, it becomes clear that Pernell’s religious experience hasn’t changed much about his very subjective sense of right and wrong. (Proof: He keeps paying his mistress, though he says they have to stop shtupping, and he bends or breaks whatever laws stand in his way of finding Jocelyn’s rapist.)

On that tip: The visions ultimately lead Pernell to accuse a police officer of doing the crime, and when the cop’s alibi holds up, the judge orders KD to mete out justice instead. And just as you’re thinking that Harris is an out-of-control megalomaniac, the cop confesses (to KD) that he did break into Jocelyn and PJ’s house and violate her. The guilty officer was just supposed to steal a book, he explains, but “they” made him perpetrate the violent sexual assault, as well.

Who is “they?” That’s a secret the cop — whom KD stabs to death — takes to his hastily-dug grave. And it becomes both the rallying cry for Pernell for the rest of the series and a pretty good reason to press “Play next” on your Amazon Prime queue.

That’s what we thought of the premiere; now we want to hear your thoughts! Grade Hand of God‘s first episode via the poll below, then back up your choice in the comments.