Never in a million years would Hand of God‘s Judge Pernell Harris ride free or die alongside Sons of Anarchy‘s Clay Morrow.

But Ron Perlman, the actor responsible for bringing both characters to life, sees a little SAMCRO in Harris’ soul.

“I think they have a good deal in common,” Perlman says, settling back onto a couch at New York’s Bryant Park Hotel. We’re both there to talk about Hand of God, the Amazon series in which he plays a corrupt judge who has a powerful religious revelation following his son’s suicide attempt. But for a moment, the conversation turns to the FX motorcycle-gang drama his character dominated for six seasons.

“They’re both men who have a large voice in their community and think of themselves as constantly being in a position where their decisions affect the greater good. And in so doing, both convince themselves that they have to be right before they do anything,” he says. “Once they do it, there is no looking back. There is no questioning. That’s what put Clay in the moral twilight.”

He continues, “The judge has that in common with him. The judge is an incredibly powerful guy. You’ll come to find out that the power that he seems to inhabit when we meet him is all-encompassing, throughout the whole town.”

But, as viewers will see when Amazon releases Hand of God in its entirety on Friday, Sept. 4, Pernell’s power is useless when it comes to finding the person responsible for events he believes pushed his son to take his own life. In fact, when we meet the judge, he’s naked and speaking in tongues in a public fountain — not exactly the best situation for a pillar of the community — and he soon takes up with a shifty preacher (Pretty Little Liars‘ Julian Morris) and a violent ex-con (Raising Hope‘s Garret Dillahunt), hoping they’ll help him carry out God’s plan. (Tbe cast also includes Body of Proof‘s Dana Delany, The Wire‘s Andre Royo and Veronica Mars‘ Alona Tal.)

Read on to hear Perlman’s thoughts on faith, fear and the Sons of Anarchy finale.

TVLINE | So I’m getting to the end of the pilot, and there’s a moment where I thought the show was going to go one way, and it took a turn that was really interesting. I was like —
“What the f—k?”

TVLINE | Yeah, in the best way possible.
That’s how I felt. And I mean, it was really easy to regard that last moment as kind of like a little writer mind-f–k, like, “I’m playing a game with you here.” But the takeaway, pretty much across the board, has been, “Holy s–t, really? Now what?” And that’s what a great pilot is supposed to do.

TVLINE | When you think “newly born-again Christian,” you think someone who’s immediately walking the straight and narrow. But Pernell Harris still does some pretty messed-up stuff, even after his religious moment.
One of the things that [series creator] Ben [Watkins] has concerned himself with is… Every single person’s faith is like their fingerprint. It completely doesn’t look like anybody else’s… [Watkins is putting] together a world of very, very high-powered, extremely successful people, who are still grappling with loss, having to make compromises, having to figure out what loyalty looks like, what fidelity and infidelity look like, having to figure out how to win in a losing situation, all these conflicting kind of things that f–k with their innate power and their innate success. 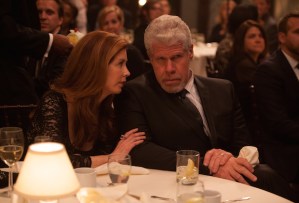 TVLINE | I imagine it’s hard to shake that kind of thing off at the end of the day.
Well. I’m able to shake things off quickly.

TVLINE | Really?
Yeah. My style of acting is turn it on, turn it off. I don’t carry stuff around with me.

TVLINE | That’s probably appreciated by the rest of the people in your life.
There are certain days where I know, “Holy s–t, today is going to be a real scary day.” Like, when you get to Episode 8, [which] is the one that brings you back into how he got into that fountain where he’s naked. And it’s a full circle. Lot of flashbacks. And that, that was the hardest piece of acting. That whole week, I should’ve been staying in a motel, because I was not fit to live with.

TVLINE | So we’ll see how this whole thing started? We’ll get a taste of Pernell before his revelation?
You’re going to find out how he got to that fountain.

TVLINE | Mind if I ask you some Sons of Anarchy questions?
Not at all.

TVLINE | Did you watch the finale?
I did not.

TVLINE | Did you hear through the grapevine, who died, who lived, all of that?
I did hear, through social media. It’s unavoidable.

TVLINE | What was your reaction, in particular to Katey Sagal and Charlie Hunnam’s characters’ fates?
Inevitable, I guess. Inevitable. Yeah… You know, the big logline was, ‘This is Hamlet on Harleys,’ so Hamlet died, everybody died. Gertrude definitely died. Claudius definitely died. Ophelia died… and the one guy who lives, [SOA creator Kurt Sutter] kills him in Season 3, so that should’ve lit a big signal.

TVLINE | Did you have any sense of wishing you’d been a part of it?
No, I had a great six years on the show. The show probably had as profound an impact on my personal and professional life, as anything I’ve ever done. It’s been a game changer in terms of me getting a table at a restaurant, which is really the only important part about being famous — that, and what you can do for your charity.

No regrets at all. It’s been highly chronicled that I didn’t like the character in his last couple of seasons. I fell out of love with Clay, because the places he went… lost the nobility, and I always tried to find nobility in that character, even when he was doing nefarious things.