Warning: The following Q&A contains spoilers for Scream’s Season 1 finale. Read at your own risk.

Whether or not you had guessed the identity of Scream‘s masked killer before Tuesday’s season finale, chances are you were surprised by something that went down during the eventful hour.

Audrey’s unexpected correspondence with podcaster-turned-murderer Piper? The fact that Kieran had nothing to do with the Lakewood killing spree? That supremely gross death scene featuring Sheriff Hudson’s intestines? Regardless of which finale moment shocked you most, we think you’ll appreciate the insight provided by executive producer Jill Blotevogel, who discussed the episode in detail with TVLine before looking ahead to the MTV horror drama’s second season.

(And if you’re looking for more Scream goodies, check out our Q&A with Amelia Rose Blaire, aka resident Lakewood serial killer Piper Shaw.)

TVLINE | As surprising as the Piper reveal was, Audrey’s involvement in the murders was especially shocking. What went into your decision to make Audrey a part of it?
We discussed a lot of possibilities — a lot of single killers and a lot of partnerships. Audrey was a character who was always a really interesting possibility for us. The episode where she was a big suspect really played beautifully, because it showed us that we were really starting to care for this character. We bond with her from the very beginning because she is victimized, but she doesn’t back down, and she doesn’t complain about it. She stands strong. You bond with Audrey early on, so you don’t ever want to believe that she is a killer or complicit or part of it.

Toward the end, Piper was kind of someone that people were starting to suspect might have been the killer. Certain things were planted that hinted at it, [like] her father was murdered. We tried to let everyone have those moments of suspicion, and… we liked letting Audrey be the other half of that equation, because she felt like the very surprising element to us. Audrey is someone that I feel like the audience relates to and empathizes with, so letting her be the connective tissue between Season 1 and Season 2 is a great way to let the audience get pulled back in. They want to believe in her. They want to believe that she’s good, but there’s also a part of them that wants to think she got some justice, too. That’s an element that’s going to pull people back in a strong way.

TVLINE | Would you consider Audrey the villain of Season 2, in that case?
I would call her a wild card of Season 2. The depth of her involvement isn’t yet revealed — just a connection to Piper. Like I said, not knowing if she ever donned the mask and actually killed someone is a big part of what’s going to keep people truly intrigued. And the fact that… her friends don’t know. You imagine the moment when Noah finds out that Audrey was a part of this, and you’re like, “That’s a hell of a TV moment that I can’t wait to see.” 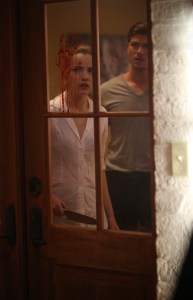 TVLINE | Considering how popular anthology series are right now, were you ever tempted to use that format for Scream? Or were you sold on keeping the same characters around for multiple seasons?
That was definitely a discussion, even when I was working on the pilot. The freedom of that is you can kill off a lot of your characters because you’re going to be starting fresh in Season 2, whether it’s with the same cast or a completely different cast and world. We all discussed it, and part of our decision happened when we put this amazing cast together, and we realized we had magic. We loved the way they all came together. The actors really bonded, so a lot of what you see on screen is real. These kids all hang out together, they were all down in Baton Rouge for the filming, they’d watch movies together. Every time a new script would come out and Noah would reference a movie they hadn’t seen, they would all get together and watch it. [Laughs] It was one of those things where we realized, “We’ve got this really cool cast. Let’s find a way to keep it going.”

It really was a challenge, but it was a challenge we embraced. We were hoping that the audience would fall in love with the core cast as much as we have. That also made it very difficult when deciding who to kill [and] when to kill them. If your heart is broken when Riley is killed or when Will is killed, then we’ve done our job. But yes, it was an option that we discussed.

TVLINE | Looking ahead to Season 2, how much will Emma have changed when the show returns? She was really put through the wringer this year.
Emma’s such a strong character. Going into Season 1 — as often happens with Episode 1 or Movie 1 of a franchise — you have a character who is inherently strong, but has to take in a lot of new information really quickly. With Emma, she was learning new things every week. She had this killer who, as she says in Episode 7, “He’s got all the pieces. He knows everything about me, and I don’t know anything about him.” He had that advantage.

Going into Season 2, she’s going to be a character with a lot more information. She’s probably going to be more closed-off, more defensive. But she’s also going to be stronger. I think of Sarah Connor, going from Terminator to T2, in that she’s this fresh-faced innocent in the first one, and by the second one — not that we’re going to see Emma doing pull-ups and assembling rifles or anything — she’s a character who’s been through the wringer. [Emma]’s going to be a little more guarded. Her strength has been tested, and her relationship with her mother is definitely going to have to evolve. And even though we get the sense that she and Kieran have bonded, she is still going to be more guarded, romantically.  You could also look at Scream 2 and Sidney’s character. She’s been through a lot, she comes out of it, she still has to live her life, but she’s seen a much darker side of life in person. [Emma’s] going to be processing that, and she’s going to be a little more guarded than she was in Season 1 — but obviously stronger, as well.

TVLINE | Will we see Piper again, possibly via flashbacks?
That’s always a possibility. There’s always going to be questions of who exactly did what, and how did that happen, and how did she get there, and how did she discover all these things. As long as they’re pertinent enough to our ongoing storyline, the possibility of seeing how things happened is very intriguing. Especially because she was a podcaster — who knows how much she has previously recorded, in terms of what she was planning to do. Those behind-the-scenes windows are really intriguing. I would definitely consider that a possibility moving forward.

TVLINE | Mr. Branson was sort of a loose end in the finale — he wasn’t the killer, but he did get caught with a student. Will he be back for Season 2?
I definitely wanted to keep Mr. Branson on the table. I thought Bobby Campo did such an amazing job taking this character, who could’ve very easily been a write-off as the skanky teacher who sleeps with a student — he ended up being more interesting. I would like to see him in Season 2. He’s definitely not going to be teaching at Lakewood anymore. [Laughs] But his presence would be really interesting. Wanting to see that scene between him and Brooke, a month after the events of the finale — to me, that’s something that would be fascinating. Also, whenever you set up a character like that who has done dark things, finding a way to give them a heroic moment or arc, or dive into his secrets — you’ve got to keep those possibilities alive. That is why Branson survived the finale. [Laughs]

Scream fans, what did you think of the Season 1 finale? Grade the episode in our poll below, then hit the comments with your thoughts and hopes for Season 2!