Warning: The following Q&A contains spoilers from Scream‘s Season 1 finale. Read at your own risk.

There are a lot of lessons to be learned from Scream‘s first season: Don’t go swimming alone at night. (RIP Nina!) Don’t bring Mike & Ikes to a movie night with your ex-boyfriend. (RIP Will!) Make sure there aren’t any cameras around when you have sex for the first time. (RIP Emma’s dignity!)

But the most important takeaway? Don’t. Trust. The podcaster.

That’s right: After nine weeks of grisly Lakewood murders and countless red herrings, murder-mystery junkie Piper Shaw was revealed to be the woman behind the mask in Tuesday’s Season 1 finale. But even Amelia Rose Blaire, the actress who played her, wasn’t expecting her seemingly innocent character to be the killer.

“I actually found out at the very end of shooting Episode 6, right before I went in to do the scene with Will and Piper in the abandoned car dealership,” Blaire tells TVLine. “I definitely did not see it coming. I was very excited and shocked and overwhelmed all at once.”

Unfortunately for Piper, she didn’t make it out of Lakewood alive. After tussling with Emma and Maggie on the same dock where Brandon James was killed, Piper was shot twice, leaving Lakewood serial killer-free. (Well, sorta. Audrey was also revealed to be in contact with Piper this entire time, but that disconcerting fact is discussed in our Q&A with executive producer Jill Blotevogel.)

Below, Blaire tells us how she prepared for the responsibility of being Scream‘s masked murderer, and the influence Serial had on her character.

TVLINE | Before you found out you were the killer, who did you think it was?
I was all about Kieran and Audrey. From the beginning, I had my eye on them. Kieran just shows up out of nowhere, he’s all about Emma, he literally makes a beeline straight for her. There’s all sorts of suspicious activity happening with him. And then Audrey — the first thing that she says to Piper is, “Nina was a stone-cold bitch who got what she deserved.” So, red flags all over the place.

TVLINE | Once you knew Piper was the culprit, how much did that influence your performance?
It had to. I had made this huge Bible of everything that the killer, or killers, were doing — who was where, every single thing that they did. And I had also been doing profiles on all the different characters, trying to decide who was behind the mask. And to then turn all of that research on Piper was really trippy and cool and creepy. There’s so much darkness there, and so much sadness. It was definitely an experience to dive into that and swim in that pool. 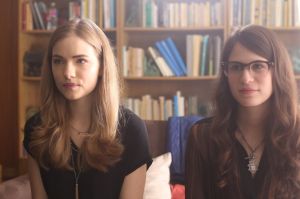 TVLINE | The Ghostface killer in the Scream movies has become iconic in pop culture. Were you intimidated to play a version of that classic character?
It was definitely intimidating. Those are big shoes to fill. I mean, [the original Scream killer] Billy Loomis — I remember that scene so clearly, the first time I watched it. I, of course, wanted to make that final scene…  as intense and awesome as I could. I honestly have no idea how it came out. But when I woke up that morning and I did that scene, it was like I got sucked into a black hole. [Laughs]

TVLINE | Your final scene is so long and complex — you’re fighting with Emma, you’re gunned down into the lake. How long did that sequence take to shoot?
That was actually my very last day of filming. We started that scene right as the sun went down and shot all through the night, into the sunrise the next day, and then some. They also brought back the stunt doubles to do some more work the next day, as well. Overall, it was two days, but the actual scene work with Willa [Fitzgerald] and Tracy [Middendorf] and I was only one night. One very epic, intense night. [Laughs]

TVLINE | Did anyone else know you were the killer beforehand? And if not, how did they react when they found out?
Nobody knew. Everybody had a lot of theories until the last episode came out. We were constantly theorizing on who we thought the killer was, who an accomplice might be — but once I found out, I kept my lips sealed. I didn’t tell anybody. The only other person that knew anything was Piper’s accomplice. I’m sure they’re going to be diving into some more dark waters for Season 2.

TVLINE | Piper seems largely inspired by the podcast Serial and its host, Sarah Koenig. Did you do any research on her before filming?
When I first got to set, one of the very first things that I found out about Piper was that she was inspired by Sarah Koenig on Serial. The very first thing I did was binge-listen to all of her podcasts. I loved them. They’re so addictive, and you’re constantly changing your theory on whether [Adnan Syed, the subject of Serial] is guilty or innocent. I really enjoyed that. I definitely drew inspiration from her, because that’s where the original idea for Piper being a podcaster was born from.

TVLINE | Is there any chance we’ll see Piper via flashbacks in Season 2?
It’s definitely a possibility. We haven’t heard anything about what’s going to happen next. They’re probably still figuring it out themselves, but I would love the opportunity to get to come back and play with this other side of Piper. Throughout the whole season, I was essentially wearing a mask. She has these two radically different sides of her personality. I’d love to get to play more of the darker side with it. But who knows? We’ll see what happens.

OK, your turn. Did you have Piper pegged as the killer? Grade the finale in our poll below, then watch our Comic-Con interview with the cast and hit the comments with your thoughts!