“I hope your ears are 18, because they’re about to get sound-banged!”

So ends the first episode of Mr. Robinson, NBC’s new comedy starring Office alum Craig Robinson. If you find the joke funny, you likely enjoyed the half-hour that preceded it, which introduces Robinson as a struggling Chicago musician who occasionally works as a substitute public school teacher.

If you don’t, well… we’ll want to hear about that in a moment. First, a brief recap:

The series kicks off at a lounge gig for The Nasty Delicious, the band Craig (played by Robinson) and his brother Ben (Brandon T. Jackson, Californication) hope will someday take them to the big time. When Craig’s high school girlfriend Victoria (Meagan Good, Deception) happens to show up, he sees an opportunity to reconnect with her after standing her up for the prom years ago. (What she doesn’t know: He skipped the dance in order to take his band’s first paying gig.)

So Craig jumps at a substitute-teaching assignment at his old high school, where Victoria happens to be part of the faculty. The rest of the staff is a bunch of harmless oddballs — including a math teacher/stripper played by Greek‘s Spencer Grammer — overseen by the hard-nosed Principal Taylor (Frasier‘s Peri Gilpin) who just happens to have been a huge music groupie back in the day.

When Craig says he can’t tell if Taylor likes or hates him, she replies, “I like Biggie. I hate Diddy. You don’t even register.” (In his defense, her mix of come-ons and take-downs is kind of hard to interpret.)

Craig spends the episode trying to figure out the best way to ask Victoria on a date, and he eventually backs out of a big music gig in order to stage a faux prom — on Parents’ Night — with the help of his willing students (who include Amandla Stenberg, The Hunger Games/Sleepy Hollow). Though the stunt wins him her forgiveness — and a permanent teaching gig, thanks to an enamored school supervisor (Tim Bagley, Web Therapy) — he’ll have to work harder for more: Victoria has a boyfriend. 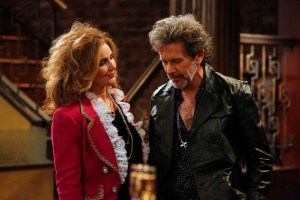 In the second part of the double-episode premiere, Craig courts a drunken rock star (Veep‘s Gary Cole) with a record label in an effort to get The Nasty Delicious an album deal. But it turns out the aging rocker has a past with Principal Taylor, who loses her mind a bit before everything returns to normal.

The semi-autobiographical comedy (the concept is loosely based on Robinson’s life) has a talented cast, but the laughs don’t come easy. Mr. Robinson could use a little after-school tutoring to help it find its groove.

That’s what we thought; now it’s your turn. Grade the double-episode premiere via the poll below, then elaborate in the comments!