THE SET-UP | In this follow-up to the 2011 movie that starred Bradley Cooper — whose preternaturally blue eyes make an appearance in the TV pilot — McDorman plays Brian Finch, a slacker musician whose potential is not just unfulfilled but never considered, until one day an old friend slips him some NZT, a drug that allows access to “every brain cell.” Boom, Super-Brian!

THE FIRST IMPRESSION | Each year, there’s one TV pilot that I drag my heels on watching — can you believe that in 2006, it was Friday Night Lights? — and Limitless fell into that trap this time around. (Never saw the movie, not some Bradley Cooper superfan. Shrug.) But then, about 10 minutes in, there’s a sequence in which NZT-enabled Brian 1) details a “bonus” project he tackled while temping for an investment firm, 2) shrewdly sizes up a supervisor’s career (and romantic) prospects, 3) plays speed chess, against multiple opponents, and 4) offers 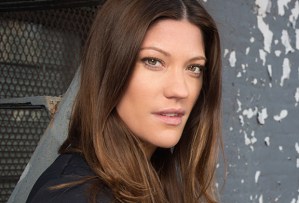 marketing advice to a hot dog vendor. Much more so than the action-y derring-do highlighted in the trailer, that — coupled with Cooper’s cameo, challenging Brian to become “someone who matters” —  sold me on the premise.

McDorman grows on you as an Everyman character, someone who is not inherently special and thus is sufficiently stupefied by his new skills. Carpenter, as an FBI agent who likes Brian for a murder rap, likely won’t have the same layers to play as when she was Dexter‘s Deb, but she pairs well enough with McDormand. Mastrantonio and Harper, as Carpenter’s boss and colleague, don’t get a ton to do in the pilot, while Alias‘ Ron Rifkin is a special bonus as Brian’s dad. Visual effects (e.g. colors saturate when Bri gets an NZT rush) give the concept an added gloss.

THE TVLINE BOTTOM LINE | With Chicago Fire not returning until Oct. 13, NBC will be vulnerable for the first few weeks of the fall, while ABC’s Wicked City will have its own audience to attract. As such, Limitless — maybe even due to those Cooper-centric promos — could gain a decent foothold.

Watch a trailer for Limitless, then vote in our poll below.
https://www.youtube.com/watch?v=yAZpdTR1mTY