This Thursday on Graceland (USA Network, 10/9c), Paige Arkin will go undercover in a bid to get cozy with wannabe Armenian crime boss Ari’s rival, Toros. Offering Briggs a hand with his op is part of Paige’s “penance” for (very understandably) bungling the team’s recent attempt to gaslight Ari.

Paige of course also has some atoning to do — if only to herself — for her decision to sic murderous Sid Markham on Mike in the Season 2 finale, an impetuous, emotional decision made in the immediate wake of learning that her colleague, roommate and sometime lover lied to her about sex trafficking victim Lena’s fate.

Here, Serinda Swan catches TVLine up on the “Twitter hate” she has fielded on behalf of her fictional alter ago, previews Paige’s new undercover gig (and the “rough” sex involved) and shares her thoughts on costar Aaron Tveit’s upcoming visit to Rydell High.

TVLINE | First rewinding a bit: You took your lumps at the end of Season 2. Jeff Eastin himself said that Paige went from being one of the most popular characters to “probably the most unpopular,” after she ratted out Mike to Sid. How was that for you as her portrayer? Was it difficult?
You know, that’s when the faith of who created the show and the writer comes into play. You look at it and say, “OK, you know what you’re doing and I trust you.” I mean, obviously I had some questions because it was such a shock for even us. Basically, last year we had to take a little time off in between [episodes] because there was an injury on set, and when that happened, all the scripts got rewritten and I was like, “Whaaaat?” For the entire season we knew what was happening and within less than a month, I suddenly was ratting out Mike.

TVLINE | It was so harsh.
It was. I think it definitely leads up to a great arc this season for not just Paige but for everyone in the house, and it adds another layer of tension. But yes, that night that it aired I’ve never had so much Twitter hate in my life. And it still goes on. They’re like, “Girl, I love you but why did you have to do that?” I’m like, “I didn’t.” There are people like, “Die, Paige.” I’m like: Calm down, people.

TVLINE | I would argue an actor’s job isn’t necessarily to create someone that people love but to create someone who makes people feel things. Maybe?
It’s exactly as you said — to make people feel things or have an experience or to support another cast member that’s going through something. There are always a million different reasons [for storyline twists] but yeah, that was definitely one of the first times I’ve read a script and been like, “I’m sorry, what? What do I do?” But a lot of people forgot what really was going on that season and the amount of deceit and manipulation that 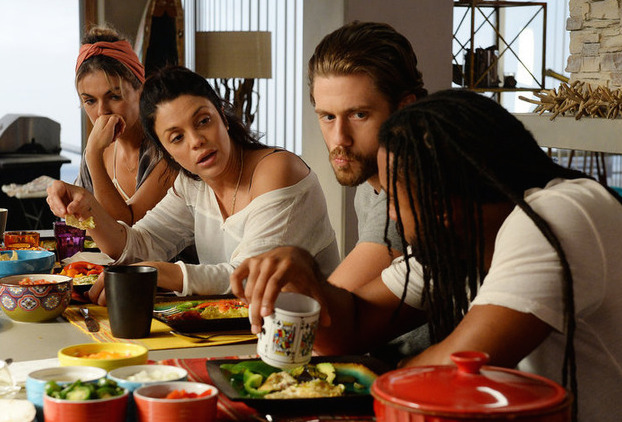 Mike was doing to Paige, and how much those [white slavery] girls meant to her and how much impact the sex trafficking storyline had on her. She definitely lost her mind a bit.

TVLINE | Since her role in Mike’s near-murder was revealed, do you feel like Paige now is incentivized to really do right by the team, to make up for it?
I think she’s right in the middle of that – and less for the team, more for herself. One of the biggest hurdles she has this season is to find her moral compass again and to realize that she got so affected by her love for Mike, and also by her love for Lena, that she lost who she was. It’s a fight between forgiving herself and accepting forgiveness from Mike. In the first two episodes, she said, “You’ve got to stop trying to save me” and Mike said to her, “I forgive you,” but the line that ended up getting cut out was, “Does it look like I’m looking for forgiveness?” Yet it didn’t need to be said. That’s the tug-of-war throughout this season, which is interesting, because I was worried that I’d be a martyr, trying to fix everything, but that’s not who Paige is and I love her for that. She’s basically like, “We’re all a bunch of corrupt assholes and it’s about time that we stopped saying that the bad that we do in this world is OK just because we have a badge.”

TVLINE | Do you feel like Paige and Mike have at least one more big conversation ahead of them?
Absolutely. Whether it is something that is shown or whether it’s something that you can tell that has gone on in private, there are definitely conversations that need to be had. But they continuously have each other’s back no matter is going on. There’s an undercurrent of love that will always be there. Will they ever be together again? I don’t know. But will they always love each other, will there always be that extra connection? Yeah.

TVLINE | Tell me about Paige’s role in what Briggs has got going with Ari.
As part of her fight for penance, she agrees to go under with the Sarkissians based on her mistake with Colby, burning the wrong fingers [during the frame job]. Nobody’s really holding her accountable, but it’s one more “rock in her backpack” to carry around. So when Briggs needs somebody to help, he knows there is a manipulation there, that she feels obligated to do it, and that storyline continues on almost all the way to the end. It’s definitely a crazy first introduction into the world. and it’s going to be a rough couple of episodes.

TVLINE | I wanted to talk about that. In one of her first encounters with Toros (played by Val Lauren), there’s a good amount of roughhousing in the bedroom. How tricky is it to playfully slap each other around without accidentally hurting someone?
I actually was deathly ill that day, so sick. It was awful. I kept apologizing to Val, and he was such a gentleman about it. People assume that when we have these very aggressive love scenes or whatever it may be that it’s all very sexy. But my face was leaking, so it was not cute at all. I know, this is what every viewer wants to hear! I should just be like, “No, it was amazing and I love it,” but no, it’s not a sexy thing.

So when you have a scene like this, basically you have a conversation with the other actor about your boundaries. There has to be a certain amount of [physical contact] in order for it to play real but there has to be a boundary in order for the person to feel safe. Val was like, “You can really hit me.” I’m like, no, dude, you don’t want me to really hit you. Finally, the stunt coordinator came over to say that for one of the takes, I’m actually going to have to slap him — and Val was super stoked. Our stunt coordinator was like, “Serinda, go like 25 percent,” because I was a gymnast and I do a lot of stunt training, and Val’s like, “No, just hit me really hard.” I smacked him so hard that he was like, “I though you broke my nose!” It was so bad. His face was bright red. It was a crazy scene, but I think the fans are going to enjoy it.

TVLINE | What kind of finale are we getting this season?
A crazy, amazing one. It rivals last year’s, that’s for sure.

TVLINE | Ending on a lighter note: Aaron Tveit got cast as Danny Zuko in Fox’s Grease: Live production. Is he the sort who belt out songs on set, between takes?
He belts those songs. He dances. He sings. He twirls. He’s amazing. I’m excited to see how they put it altogether, but we will all be watching for sure!