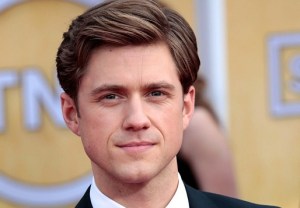 Aaron Tveit, you’re the one that Fox wants.

The Graceland leading man and Broadway actor will play Danny Zuko in the network’s live staging of Grease.

“I’m thrilled and honored to be joining this incredibly talented team of actors in reimagining this classic and beloved musical,” Tveit said in a statement. “Playing Danny Zuko is a dream role and I can’t wait to be a part of all the fun that comes along with performing live on television.”

In addition to his TV roles on Gossip Girl and currently USA Network’s Graceland, Tveit has plenty of musical theater experience. He appeared in the 2012 film adaption of Les Miserables and starred on Broadway in Catch Me If You Can and Next To Normal. He also played the role of Roger in Rent at the Hollywood Bowl in a production directed by Neil Patrick Harris.

What do you think about Tveit as Danny? Hit the comments with your thoughts?