If you watched the two-hour season finale of The Bachelorette — three hours, if you’re still glued to the TV for the requisite After the Final Rose trainwreck — you spent 120 minutes watching Kaitlyn Bristowe weep her way through a decision between Shawn Booth and Nick Viall.

If you’re reading this recap, however, you don’t want to wait any longer to find out which suitor received Kaitlyn’s final rose. (Not intended as a euphemism, but hey, it works!)

So let’s get the big news out of the way: Kaitlyn ultimately chose Shawn as the man with whom she wanted to spend the rest of her life, promptly accepting the wedding proposal that came after she made her decision.

Of course, to anyone who read this story in June — which suggested that Kaitlyn revealed Shawn as the winner via Snapchat photos — his victory comes as no surprise. But even with this season’s finale spoiled by the bachelorette herself, Monday’s episode wasn’t without its highlights. Let’s recap:

MEET THE PARENTS | Somehow, despite this particular event happening weeks ago, Kaitlyn’s intimate evening with Nick becomes the hottest of conversation topics as her family prepares to meet both Nick and Shawn. “We had some time off-camera, and… things happened,” Kaitlyn sheepishly tells her freakin’ parents, leading Kaitlyn’s mom to become skeptical of her daughter’s relationship with Nick, which may be purely physical. But then Nick bursts into tears while telling Kaitlyn’s mom about his love for Kaitlyn, which not only proves that he’s emotionally complex, but that his crying makes me deeply uncomfortable. 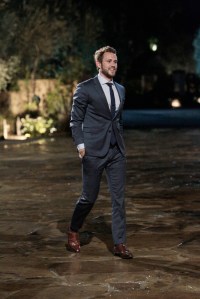 Later, Mama Bristowe brings up Kaitlyn’s hotel rendezvous to Shawn, who — somewhat shockingly — handles the conversation like a champ. (He doesn’t even flinch when she uses Nick’s actual name. Gold star!) And although Kaitlyn’s sister declares that she’s firmly on Team Shawn, based on the way Kaitlyn acts when she’s with him, it’s ultimately too close to call if Kaitlyn’s family prefers one guy over the other.

THE FINAL COUNTDOWN | Nick spends his final date making out with Kaitlyn on a boat, then later, making out with her on his couch. Then he tells her, “I got you something. It’s in my bedroom,” which is a road I can’t help but feel we’ve been down before. (The gift — a framed photo of Nick and Kaitlyn, next to a handwritten poem from Nick — is actually pretty cute, even if he did misspell “energy.”)

Shawn’s final date with Kaitlyn is considerably more awkward. The two of them essentially just sit together on a bench, going back and forth between, “Tell me what’s on your mind!” and “No, you tell me what’s on your mind!” Fortunately, they pull it together later that evening, and Shawn gives Kaitlyn his own present: a jar full of junk! JK, this gift — a memory jar, filled with mementos from their past few months together — is also very sweet.

THE MOMENT OF TRUTH | But let’s fast-forward through Kaitlyn’s inner conflict, the engagement-ring-selection process and all that B-roll of Shawn’s shirtless torso. It’s finally time for Kaitlyn’s Big Decision, and Nick is up first to hear who she’s picked. (In short: not him.) 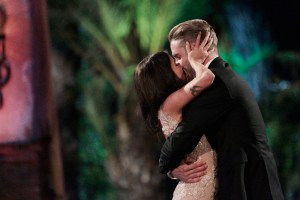 Kaitlyn’s rejection of Nick is honestly pretty brutal. After delivering a heartfelt speech about his love for Kaitlyn, Nick pulls out that coveted Neil Lane jewelry box… only to have Kaitlyn stop him before he can open it. (Say what you will about Nick, but watching him realize Kaitlyn hadn’t chosen him was a pretty gut-wrenching moment, no?) And although Kaitlyn insists that she does love Nick, despite her heart being with someone else, Nick has a few honest words for her: “You don’t love me.” [mic drop]

While Nick pouts in the backseat of a limo — he even took off Kaitlyn’s promise ring! — Shawn pulls up, and his speech to Kaitlyn is not interrupted by a break-up. “I am completely yours, and I will always be faithful to you,” Kaitlyn responds to Shawn’s profession of love. “And I have been waiting so long to tell you how I feel, because I love you with all of my heart, like I’ve never loved anybody before. And I can’t wait to make a lifetime of memories with you, and only you, because you are the one and always will be.”

He proposes! She says yes! There’s sweeping music, a final rose and they drive off into the night! …Now how long until the split makes tabloid covers?

OK, your turn. Was Shawn the right choice for Kaitlyn? Were you, like me, inexplicably rooting for Nick? Did you have any emotional investment in the outcome whatsoever? Cast your vote in our poll below, then hit the comments with your thoughts on the finale!