THE SET-UP | Suppose a mysterious gentleman enlisted a former elite military operative to help prevent crimes as predicted by a supercomputer? Interesting, a person might say.

THE FIRST IMPRESSION | Solving crime after it is committed is so passé, given that this fall we have The Player as well as Fox’s Minority Report on our screens, while CBS’ Person of Interest rides the pine until midseason. Here, Winchester has a bit more fun than Strike Back pal Sullivan Stapleton over on Blindspot, playing Alex Kane, a G-man turned Las Vegas security expert who is recruited by the calm ‘n’ cool Mr. Johnson aka The Pit Boss (Snipes) and his colleague Cassandra aka The Dealer (Wakefield, at right) to 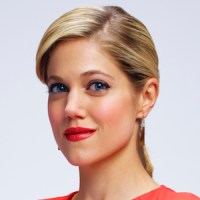 stop predicted crimes, while the world’s ridiculously wealthy wager on the outcome. Nudging Alex to take this gig as “The Player” is the chance to avenge the death of his wife (played in far too few scenes by Cara Buono).

POI comparisons beg to be made, if only because Alex at one point turns to a security cam he knows Cassandra to be monitoring and asks for “help.” But if Finch and Reese exist in a slightly remarkable universe, The Player‘s playground is downright unbelievable, especially when Johnson accesses from his clear iPad a hologrammed wall of bettors. That said, Snipes appears to be having a ball, peppering his dapper alter ego with specific tics and flourishes, while Winchester has a real root-for quality and strongly sells the action. Wakefield’s tone relative to the others seems a bit off, so the jury is out on her perky-yet-deceptive character. Also, let us all hope they burned through all the gambling wordplay in the pilot (a la “Fold, Mr. Kane. Your hand isn’t strong enough”).

THE TVLINE BOTTOM LINE | Opposite the buzzy-yet-intense Murder and cerebral procedural Elementary, The Player has the chance to grab some eyeballs, offering the closest thing NBC has had to a straight-out action series in a while. Of course, given the Peacock’s track record in the time slot, the Vegas drama faces — wait for it — tough odds.

Watch a trailer for The Player, then vote in our poll below.
https://www.youtube.com/watch?v=2BbaeJvSi1Q