I’ve been thinking… if this whole ‘local terrorist’ thing doesn’t pan out, Charles DiLaurentis could forge a pretty sweet fallback career as a party planner.

Alison’s presumed-dead brother threw himself a hell of a birthday bash on Tuesday’s Pretty Little Liars, complete with killer arcade games, an accidental drugging and a sting operation that had the girls waving their hands in the air like they just didn’t care. (Editor’s note: I suspect the girls did, in fact, care.)

Of course, the party might not have sucked so much if Ali hadn’t given Charles’ name to the Rosewood PD. Charlie had been very specific about coming alone — it was mentioned on the invitation, right next to “bring your own black hoodie” — and the brothers appeared to be making a genuine, albeit shadowy, connection before the fuzz busted in. (I mean, at least Charles didn’t push Jason down an elevator shaft this time, right? That’s progress.) 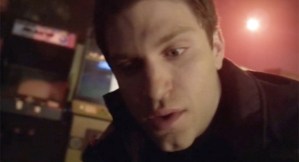 OFFICER DOWN | But how could I possibly talk about Charles’ big day without highlighting the best part: Toby gobbling down some of Spencer’s goodies and getting stoned in the middle of the stand-off! I wasn’t sure where the writers were going with this at first; when Toby took the special snack from Spencer, I assumed he was going to confront her about her problem. But what transpired was much more entertaining, even if it’s probably going to lead to yet another Spencer-Toby breakup. Verdict: Worth it.

OH, EMILY… | We got some good news and some bad news on the Sara front this week. First, the good: I applaud Sara’s decision to move out of Emily’s house and stay with her weird friend in whatever town she’s from. I say the more distance between them, the better. And that’s where the bad news comes in: Sara’s only moving out so she and Emily can start a real relationship — but unless I’m crazy, having a mutual kidnapper in common isn’t enough of a reason for two people to get together. Do I trust Sara? Yes: ___ No: _X_

WHAT THE FREDDIE? | The episode ended with Jason and Alison watching an old home video of themselves attending a second cousin’s birthday party — or at least they thought it was for a second cousin. It turns out “Freddie,” the birthday boy in question, was actually Charles, which explains why Jason and Ali remember not being allowed to tell their dad about it. That’s right, folks, we’ve got another fake name to remember.

* Having Cody Christian on PLL and Teen Wolf at the same time is messing with my sense of the universe. Should we just assume he’s evil on both shows, or…?

* Congrats to Aria on making it to the finals in that photo competition. Girl, you deserve it.

Time for your take on this week’s (surprisingly hectic) episode: Are you glad Emily and Sara are staying together? Did you enjoy stoned Toby as much as I did? Drop all of your comments below.