Because all roads on Teen Wolf lead back to Eichen House, Scott’s pack on Monday booked a round-trip flight to the cuckoo’s nest, where a familiar face — one with a not-so-blind third eye — eagerly awaited their arrival.

In what I now consider to be a somewhat Little Mermaid-inspired trade, Dr. Valack — Peter’s former cellmate and the author of that Dread Doctors book Malia found last week — requested a recording of Lydia’s banshee scream in exchange for vital information about the masked murderers. Here’s what they squeezed out of him:

[The Dread Doctors] were scientists once, scientists who worshipped the supernatural. They found their secrets in electromagnetic forces — ways for them to prolong their lives, give them more power and, most importantly, making you forget you ever saw them.

–
Valack also blamed Scott and his friends for screwing with the Nemeton, thus drawing the Doctors back to Beacon Hills (which is actually a pretty fair accusation… because they totally did). The tense encounter, like so many of my high school English classes, ended with Valack screaming “Read the book!” while Stiles and Lydia ran for their lives in the opposite direction.

Among the many questions I still have about the group’s trip to Eichen House, though, this one definitely tops my list: What the hell was this thing?

I’m pretty sure Valack identified it by name, but it sounded like he called it a “Slore,” and I figured that couldn’t be right. Anybody have a bestiary handy?

KILLER STILES | I’d like to back up a bit and discuss this week’s killer — in every sense of the word — opening scene. The Stiles-vs.-Donovan sequence felt very old-school horror and even reminded me a lot of Teen Wolf‘s first season. Dylan O’Brien’s performance in the moments following Donovan’s accidental impaling was brilliant; it was definitely Nogitsune-level material for him and he knocked it out of the park. It’ll be sad to watch him lose his mind, and I already didn’t like Stiles’ tense moment with Scott (“We shouldn’t be killing anyone we’re trying to save”), but at least we know O’Brien will put on a damn good show. 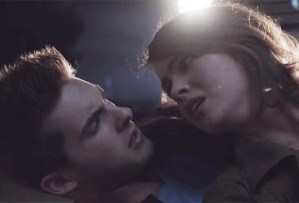 HOT FLASH(BACK) | Question for the group, and be honest: Am I a bad person for kind of enjoying Theo and Malia’s episode-long flirtation? The naughty library glances, the hand-touching during that (illegal) driving lesson… all of it. I know Theo’s probably evil — we literally watched him tip off the Doctors about the gang’s trip to Eichen House — and I’d never genuinely wish heartbreak on Stiles, but the electricity between Theo and Malia this week was indescribable; it was like Kira holding hands with Pikachu in the middle of a thunderstorm. Being with Theo even made Malia’s latest flashback of the Desert Wolf, who apparently caused her adoptive mom’s car accident, an oddly intimate experience. (See the photo to the right for further proof.)

STYDIA SHOUT-OUT | While we’re on the subject of sexual confusion and repressed emotions, was anyone else (pleasantly) caught off guard by Scott’s speech about Stiles still liking Lydia, and how they’re “pretty good together?” Don’t get me wrong, I ‘shipped the crap out of those two in Teen Wolf‘s first few seasons, but his crush seems to have fizzled out, thanks mostly to Malia’s arrival. So why would Scott bring it up now? Could the sails of the mighty ‘ship Stydia be catching a second wind? It would make about as much sense as anything else happening in Beacon Hills right now, so who even knows. 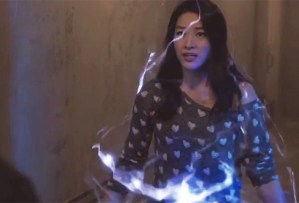 WHAT THE FOX, KIRA? | I’m not really sure how kitsunes work, but I think Kira might need new batteries. After going Super Saiyan on Lucas last week, she started muttering unsettling Japanese phrases in her sleep. And as a show-stopping third act, she turned her electric wrath on Scott during their field trip to the looney bin. She also accidentally disabled Eichen’s electromagnetic barrier, allowing the Doctors to break in, but I’m more worried about Kira than those wannabe surgeons. Do we think she’s going to be OK? Do we need to make a Kickstarter? Just dare me.

To be fair, there was one upside to Kira’s light show. It allowed for this badass moment to happen:

Your thoughts on this week’s explosive hour? Drop ’em in a comment below.