Swords! Sex! Sarcophaguses! Game of Thrones junkies suffering from hack-and-slash withdrawal are likely to find respite in Spike TV’s Tut, a three-part miniseries about the titular pharaoh’s ascension to greatness.

The first installment, which premiered Sunday, introduces viewers to Tutankhamun (Twisted‘s Avan Jogia) at the ripe old age of nine, when he’s forced to make child-friendly decisions like: “Do I have to watch this guy’s wife getting dragged around town by a horse?” and “Can someone else slit this kid’s throat?” For both hesitations, Tut is deemed “weak.” (Ugh, kids.)

The young pharaoh eventually grows into a powerful leader under the watchful eyes of Grand Vizier Ay (Sir Ben Kingsley) and General Horemheb (Thrones‘ Nonso Anonzie), both of whom harbor their own dark, power-hungry agendas. There’s also Tut’s “pal” Ka (Once Upon a Time in Wonderland‘s Peter Gadiot), who spends most of him time lusting for — and occasionally lusting with — Tut’s wife Ankhe (Tyrant‘s Sibylla Ankhe). Basically, everybody sucks. 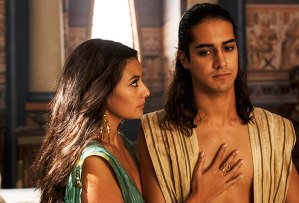 In Disney terms, this first part takes Tut from a Princess Jasmine, a leader totally out of touch with the common people, to a King Simba, a leader who returns home to crush his enemies after being presumed dead by the very people sworn to protect him. (I don’t know if that’s what Spike was going for, but trying to stop me from drawing Disney parallels is a futile practice.)

Naturally, we also get to see Tut let his pharaoh phreak phlag phly; his blossoming relationship with Suhad, the beautiful Mitanni girl who rescues him from battle, reunites him with former Twisted co-star Kylie Bunbury. On the topic of that reunion, Jogia tells TVLine:

Suhad and Tut have a mutual respect and a love that’s very modern in an old world. … It was cool to be able to work with someone you have built-in chemistry with. Going into this situation, I had no ida what it was going to be like, so knowing I was taking this on with someone I knew really helped.

* Save for shows like Game of Thrones, lengthy title sequences are often forgotten in today’s TV landscape. When done right, they have the vital task of setting the tone and inviting viewers into a new world; Tut‘s is executed brilliantly.

* Watching Jogia act opposite Once Upon a Time in Wonderland‘s Gadiot makes me want to see him play Aladdin on the ABC flagship series more than ever. I mean, come on!

* Lastly, does anyone know the budget for this miniseries? Whatever it is, Spike TV got its money’s worth; everything from the sets to the locations to the costumes looks exquisite.

Now, for your observations: Will you return for the next two installments to see Tut reclaim his throne? Grade the premiere below, then drop a comment with your full review. 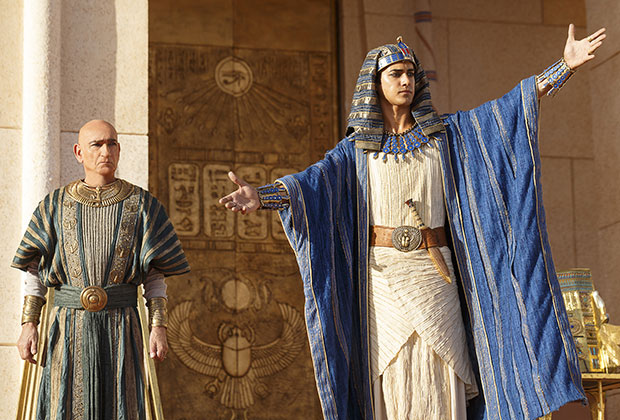