Expecting Hannibal to hold back on the gore would be as absurd as pulling up to a White Castle window and ordering a quinoa salad with bean sprouts and kale. (Oh God, remember that case last season where the victims got hollowed out and turned into beehives?)

That said, it’s going to take me weeks to recover from this week’s one-two-three punch of murderous eel, facial-transplant surgery (sans anesthesia) and world’s most upsetting surrogacy. OK, maybe I cheered a little at the first of those horrors, but I’m fully expecting to wake up in a cold sweat later this week, clutching at my throat, visions of the slithering sea beast turning my windpipe into its favorite napping spot.

Let’s be completely honest, though: We all kinda knew in the backs of our minds that “Digestivo” was going to be epic, and epically horrifying, right? I mean, TVLine broke the news back in January that Episode 8 would feature a flash-forward taking Will out of his spiral into that sociopath life and turning him into a (relatively) (for this show, anyway) well-adjusted-ish husband and stepdad. So despite Hannibal and Will kicking off the hour as prisoners (and imminent chew toys) of Mason Verger, the smart money was on Episode 7 delivering a daring escape/gruesome flip of the switch. (And, to a large degree, the smart money was right.)

With that in mind, let’s recap the action: 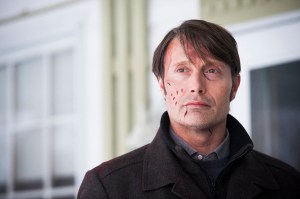 IF YOU CAN’T TAKE THE HEAT | The hour kicks off with Mason and his nursemaid/psycho doctor Cordell discussing their plans to butcher their prisoners and turn them into delicious dinners.”You boys remind me of that German cannibal who advertised for a friend, then at him and his penis before he died. Tragedy being the penis was overcooked. Go to all that trouble to eat a friend and you overcook his penis!” Mason howls, all Jimmy Stewart-like. But he can’t help but share his own twisted plan: “I’m committed to enjoying every bite of you.” How will that play out? Hannibal’s hands and feet will be the first menu item —”sizzling on a Promethean barbecue,” smiles Cordell. But Will turns the medical man’s facial expression upside down by taking a bite out of his cheek. Alana, ultimately, has the best advice for the guys who really ought to be channeling their energies into a Food Network Star-type competition: “Play with your food, Mason, and you give it the opportunity to fight back.”

AGONY OF THE FETUS | When Alanna learns that Mason has not only Hannibal in captivity, but also Will, her descent into amoral murderousness takes a detour. “Mason’s a sadist,” she reasons to lover Margot. “He’ll torture them and take the time to enjoy it: That gives us time.” Margot, though, is briefly placated when she learns her brother didn’t discard her stolen eggs, but rather implanted one into another female. (“PLEASE don’t be a pig,” I write in my notepad midway through the scene… before momentarily losing consciousness when her the sadistic Mason adds that she’ll need to “prepare yourself psychologically” before  coming face to face with the surrogate.

Alana and Margot both know this won’t end well — which leads them to the pig barn where a branded Hannibal (eyes dead as a shark’s) is shackled in the most twisted of positions. Our titular anti-hero insists Margot will need to kill Mason herself, but tells her he’ll take the blame and clear her name. It’s Alanna, though, who was all too happy to see Hannibal mutilated to prevent any future deaths (especially her own), that sets him free. “Promise me you’ll save him,” she pleads for her old pal Will. “Please.” The look of euphoria on Hannibal’s face as he removes his collar tells us he’s planning to do more than rescue his addled BFF/betrayer, but also render some homicidal justice to his enemies.

FACE/OFF | Uh-oh. Mason tells Will he’d looked at his face the entire time Will and Hannibal watched Mason cut away his own (and feed it to Will’s dogs). The revenge plot? Have Cordell remove Will’s face — sans anesthesia — and then transplant it to Mason’s skull. When our meat-rendering mogul wakes up, though, he finds Cordell’s visage carelessly pressed against his own deformed image. It sloughs off like a piece of dead skin, leaving Mason bloodied and more horrifying than ever.

Mason’s Very Horrible, Awful, No-Good Day has one more stop-off, though, as Alana and Margot reveal they harvested his sperm by pressing a cattle prod against his prostate. That’ll be far from the most invasive probe of the hour, though, as Mason’s struggle with his sister – now able to produce an heir to her big bro’s fortune and avoid the estate going to the Southern Baptist Church — wrestles him into his eel tank. As Alana and Margot hold him under water, the slithering creature finds Mason’s foul mouth, forces its way down his throat, and ends his reign of terror.
eel down his throat

JACK’S BACK | Jack escapes the bent Italian detective’s orders that he be gutted — thanks to Chiyoh’s rifle — then points Hannibal’s traumtized childhood friend to Mason’s Maryland farm. Chiyoh — a character whose purpose never quite came to pass in Season 3 — ushers Hannibal and Will to the latter man’s house, then as Will recuperates, asks her childhood pal if he’s the one who ate his sister. “Yes,” he whispers back. “But I did not kill her.” (Ummm… lesser of two evils, I guess?)

Will and Hannibal have a farewell chat that’s too esoteric by half — really, we’re still discussing shattered teacups? — but the endgame is Will expressing how “I dont want to think about you anymore.” His parting shot — “I don’t have your appetite. Goodbye, Hannibal.” — feels final, but instead of turning him into a gamey ragout or fleeing the scene altogether, Hannibal emerges from the shadows upon Jack’s arrival (backed by an FBI team).

“We didn’t catch you,” replies Jack. “You surrendered.”

And then, Hannibal sets into motion the Red Dragon chapter of our tale.”I want you to know exactly who I am,” he shoots back, turning and facing Will, “and where you can always find me.” Chills. Shudder. Can all this be wrapped in the next six episodes?

What did you think of this week’s Hannibal? What are your hopes for the final slate of episodes! Sound off in the comments!