THE SET-UP | A naked, extremely tattooed amnesiac (played by Alexander) emerges from a duffel bag in the middle of Times Square, sparking a mystery that promptly ensnares FBI Agent Kurt Weller (Stapleton), whose name is inked on the Jane Doe’s back.

THE FIRST IMPRESSION | Save for known properties such as Supergirl and Heroes Reborn, the Greg Berlanti-produced Blindspot is perhaps the fall TV season’s biggest fastball down the middle, coupling as it does two highly telegenic leads whose alter egos are fated for ‘shipping (Kurt + “Jane” = KAne?) with a noisy, quickly digestible premise. Having played a detached Asgardian in the Marvel-verse (as well as Kyle XY‘s very special Jessi), Alexander is a perfect fit as the astray and yet remarkably skilled Jane, 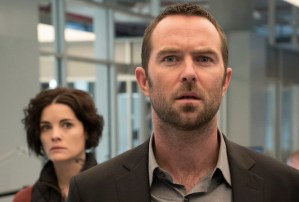 while Stapleton strikes the right balance of authority and measured compassion. Among the supporting cast, Jean-Baptiste pops the most in the pilot, as Weller’s pragmatic FBI boss. (Hurray for a team leader who isn’t Wrong Every Step of the Way!)

Blindspot‘s Achilles heel, if there stands to be one, is in fact expressed aloud multiple times in the pilot: Why would someone cover this woman with clues to stoppable crimes, instead of just phoning in the tips? (Especially if, in success, some of her ink won’t be explored for seasons/years to come?) That’s obviously the grand mystery, and as such will be dragged out for a time. For now, the pilot offers at least a couple of hints at Jane’s unusual origin, as well as suggests that one character might not want every tattoo of hers to be looked into….

THE TVLINE BOTTOM LINE | Castle and NCIS: LA have 13 seasons between them, so there is certainly opportunity for a “new kid” to show up in the time slot and grab some eyeballs. And given its procedural-with-a-twist DNA, Blindspot is poised to be more Blacklist that State of Affairs.

Watch a trailer for Blindspot, then vote in our poll below.