If you’ve been screaming at the TV for Rookie Blue‘s Nick and Juliet to make a move, you won’t want to miss this Thursday’s episode (ABC, 10/9c).

The reappearance of Nick’s MIA brother not only forces the cop to face his past, it also “really puts a timer on” Nick and Juliet’s flirtatious dance, star Peter Mooney previews.

“When she sees what she sees in this episode, it’s time to decide if she’s in or out, because it’s a lot to take on,” he says. “It’s something she realizes she can either deal with or not. So this is the episode where it comes to be undeniably, one way or the other.”

Below, Mooney also talks about the familiar face playing his sibling, Nick’s seemingly perfect facade and the show’s fate. And even after Rookie Blue wraps Season 6, you’ll still be able to watch the actor on TV this fall thanks to his very different role on Heroes.

TVLINE | This episode really delves into Nick’s past and family. Was that something you were eagerly anticipating, or was it a pleasant surprise when you got the script?
It was sort of both. We got the order for the back nine [episodes] just as we were about to start the season. That opened up the possibility to spend some episodes focusing more on characters individually and what brought them to 15 [Division]. It was definitely a very exciting surprise when I heard about the script they were working on, especially because it’s a story that I discussed with [executive producer] Tassie [Cameron] — aspects of it — from the moment I first met with them before coming on the show. So it was really cool to see that come to pass a few years later.

TVLINE | Tassie told me it was a very emotional one for her to write. What was your reaction when you actually got the story and were acting it out?
It was a real trip to film it. We were filming with this great director called Steve DiMarco, who’s fast and furious and has this great energy. There was no sitting around on set. We were really hammering through the episode, which was great. It felt really immersive. There wasn’t time to pop out of it, which I loved.

TVLINE | Nick’s brother is played by Charlotte Sullivan’s husband, Peter Stebbings, who also directed the season premiere. Did that help you establish a brotherly dynamic on such short notice?
Peter and I have known each other for years. We’re friends through Charlotte. I wrote a short film a few years ago that Peter directed and Charlotte and I were in. So it was really nice to be working with someone I knew. Even though it’s Nick’s estranged brother, you want to clue the audience in to a connection right off the top, so that was a lot easier to do with someone like Peter than trying to just muster it.

TVLINE | How does Nick handle the return of his brother?
I would say as well as he possibly could. [Laughs] It really, really throws him for a loop. Nick’s time in Afghanistan and Nick ending up at 15, there’s a lot of stuff that he’s on the run from, and this is the episode where it all catches up.

TVLINE | Andy basically told Juliet that Nick has no flaws. Did you see this episode as showing that Nick isn’t perfect?
Yeah, Nick’s flaws – what’s that line? – come not in single whatevers, but in droves. This is the episode where you get to see not a little flaw, but a big flaw. You get to see him really, really pushed to the brink. It’s not that there’s some big, hidden darkness inside of him, but you see when challenged, when faced with really, really tough decisions, he’s not Superman. They’re really tough decisions for him to make, trying to weigh being a professional and being a police officer and being human.

TVLINE | But he does sometimes appear to perfect.
[Laughs] That’s purely in the writing — which was really clever, dropping that line in a few episodes before and then we get to see that no one’s perfect. The reality is everyone has their flaws. Some people’s are just waiting in the wings a little longer. 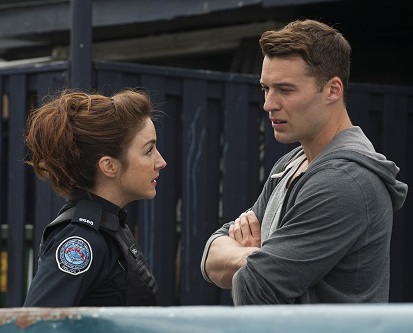 TVLINE | When they introduced Erin [Karpluk] as Juliet, it felt like they were really trying to bring in a viable love interest for Nick. Do you see them as something that could last?
I think so. Any relationship that starts off with a door prizing on the street and smashed birthday cake, it’d be a good story to tell down the line anyway. So there’s definitely some real potential there.

TVLINE | When Nick first came on the show, he was very serious. Then this season, he’s been a little bit jokey and he’s been very cocky with Juliet.
Yeah. He’s trying a whole new thing because his track record with girls isn’t great. He’s shaking it up a bit.

TVLINE | Are you getting any indication one way or the other if there will be a Season 7?
We’re very, very close to finding out. I don’t know. But I put my phone on airplane mode lest it bling with news during this interview. We’re literally that close to having some news.

TVLINE | You’re also going to be on Heroes: Reborn. Is there anything you can say about your character?
It’s a very big departure from the world of Nick and good guys. It’s just a little blip that fit in schedule-wise, but it was so much fun to do.