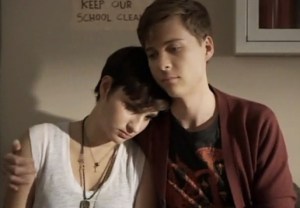 Last week’s Scream series premiere threw a whole mess of stuff our way: exposition, a severed head and, of course, countless questions. Tuesday’s follow-up hour aimed to answer a few of those brain-busters, but first… another victim!

Armed with a well-placed noose and a misleading phone call, the Lakewood killer sent Audrey’s girlfriend Rachel off to that big victim meet-and-greet in the sky, where Nina’s been hanging out solo for a week — sitting on Pottery Barn furniture, naturally.

Audrey was pretty bummed to learn of her Juliet’s unfortunate balcony experience, as was Emma. In fact, Emma felt so guilty about Rachel’s murder that she decided to spend some time with her corpse at the morgue — because that’s apparently a room anyone’s allowed to waltz into. (And they wonder why people keep getting murked in this town!) 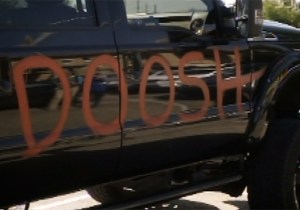 CAUGHT RED-HEADED | Remember that red stuff we saw on Noah’s forehead at the end of the pilot? You know, the stuff we all assumed was blood? Turns out it was paint, which he used to write “doosh” on Jake’s car. And no, I didn’t misspell that; Noah did, assumedly to throw Jake off his trail, which worked about as well as Nina’s don’t-get-killed-first plan. … And while we’re talking about Noah, let’s all agree now that his lady pal Riley is hiding something. Seriously, “That dragon chick from Game of Thrones“? She’s obviously playing dumb to lower Noah’s defenses — and, you know, to cover the fact that she’s a murderer.

BLAME GAME | Of course, I’m not the only one pointing fingers around here. Kieran seems pretty convinced that Emma should be suspicious of Will, especially after the cheater conveniently showed up at her work right after some hooded weirdo tried to scare her in the alley. Regardless of who was or wasn’t in the hoodie — and I’m not totally ruling out Scream‘s version of Sarah Koenig, for the record — I’m more disappointed that Emma appears to be giving Will a second chance.

CAN YOU FEAR ME NOW? | And what would an episode of Scream be without a creepy phone chat with the Lakewood killer? Emma was, once again, on the receiving end of his/her/their call, which included some not-so-nice sentiments about her “two-faced” friends and “whore” mother. ( I no longer subscribe to this theory.)

Your take on Episode 2? Any new theories about the killer(s)? Drop ’em all in the comments section below.