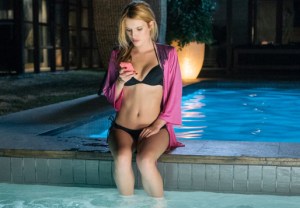 Terror was reborn — albeit with a slightly remodeled face — on Tuesday when MTV premiered Scream, a small-screen slasher inspired by Kevin Williamson’s classic horror movie franchise.

The big debut kicked off with “it” girl Nina Patterson — played by Bella Thorne, who’s already having a rough week after that whole heroin thing — being selected as the masked killer’s first victim. And while no one knows who offed Nina, her murder brings back fond memories of Brandon James, an unfortunate bro who terrorized the town of Lakewood a few decades earlier.

You know what, maybe the best way to dissect the series premiere is to examine each of the characters, most of whom double as potential murder suspects:

* First up is Emma, pretty much the only character I don’t consider a suspect, if only because she appears to be an object of the killer’s affection. Emma doesn’t know it yet, but her mother was the love of Brandon James’ life, and she unknowingly aided in his eventual murder — that is, if he even was murdered. Her budding relationship with Kieran, the new school hottie, became even more complicated in the premiere when she learned his dad and her mom are also romantically linked.

* There’s also Emma’s former pal Audrey, who exhibits all the qualities of a ticking human time bomb. After becoming the subject of an unwelcome viral video — she was filmed kissing a girl in a parking lot — Audrey became a social pariah, and when she found out Nina was behind the whole thing, she totally lost it. And what was up with that photo of Brandon James in her bedroom? Do all teen girls fawn over serial killer pin-ups these days?

* Actually, let’s go back and talk about Kieran for a second. We don’t know much about him — other than (1) he’s hot, and (2) he’s living with his dad because his mom and stepfather died in a car accident six weeks prior — but that doesn’t seem to bother Emma, with whom he swapped spit in Brooke’s greenhouse after just a few minutes of flirtation. I think we’re supposed to be wary of him, hence Emma making note of his “dark mind,” but at this point, it’s probably too soon to rush to judgment. For now, let’s all just sit back and enjoy the pretty.

* Then there’s Will, who began the premiere as Emma’s doting boyfriend and ended the hour as a cheating low-life with enough secrets to rival a Pretty Little Liar. Not only did he sleep with Nina during a brief break from dating Emma, but he lied about where he was the night she was killed and delivered a pretty chilling threat to Brooke for revealing his infidelity: “If you ever get between Emma and me like that again, I will break you.” His exchange with Jake at the end of the hour, in which it became clear they both have something to hide, also didn’t help his case.

* Speaking of Jake, how do we feel about him? I mean, he’s obviously a douche who had access to Nina’s webcam — and an apparent inability to trash files — but is he smart enough to be involved in her death? I don’t think he’s even smart enough to dress himself in the morning, though I also wouldn’t protest if he decided to skip that part of his routine one day. Just saying.

* Noah, the awkward nerd with a slasher movie obsession (“Some guys like sports, I like serial killers.”), is also worth keeping an eye on. My guess is that he’ll stick around long enough to help narrate the chaos, but in the end, he’ll be neither a killer nor a survivor.

* Now for the “others” category, the people less likely to gut someone than get gutted themselves. First up is party girl Brooke, a real-life Mean Girl with a penchant for spilling other people’s secrets. She’s sleeping with bad-teacher Seth, whose love for scotch and sodas is matched only by his disdain for underpants. Brooke’s friend Riley is also somewhere in the mix; she seems innocent enough, but sometimes the ones with all the questions are merely hiding the fact they really have all the answers.

What’s your theory about Nina’s killer (even though it’s probably way too early to speculate)? Grade the premiere below, then drop a comment with your full review.