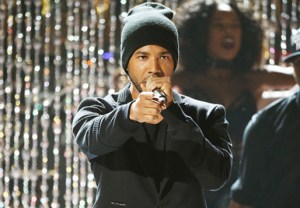 Empire star Jussie Smollett brought back fond memories of Lucious Lyon’s White Party during Sunday’s BET Awards, yet again turning a performance of “You’re So Beautiful” into a powerful statement about equality.

Following killer performances of “No Apologies” and “Drip Drop,” courtesy of co-stars Bryshere Y. Gray and Serayah, Smollett stormed the stage for a powerful rendition of another Empire anthem — and you can bet he went with the “man loves a man” version.

“We live in a nation where freedom is what we represent, yet we are still fighting every day for the basic freedoms of all of our people,” Smollett roared, as the music dropped out behind him. “Let the Supreme Court ruling be proof of how far we have come; let the deaths of our sisters and brothers be proof of how far we have to go. No one is free until we are all free.”

And this time, Lucious wasn’t mean-mugging Jamal from the balcony. He, along with the biggest names in rap, was cheering for his son from the audience. (Speaking of which, did you catch Nicki Minaj mouthing the words to “Drip Drop”? Maybe someone wants back on Fox!)

Watch the Empire cast’s full BET Awards medley below, then drop a comment with your thoughts on the performances.