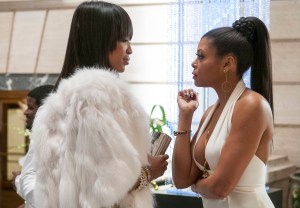 My fellow Americans, we received some devastating news this week, courtesy of Fox’s Empire: We are all just Boo-Boo Kitties, chasing our tails and kidding ourselves that we’ll ever keep it as real — or as tight — as Cookie Lyon.

I mean, try this one on for size: Ex-con Cookie walks into a celebrity soirée, spies her barely-legal rapper son with the fortysomething girlfriend he refers to as “Mama,” and begins throwing shade like a bamboo umbrella.

“I’m not one of your jailbird mates, OK?” huffs an unimpressed Camilla, the white-hot cougar (who happens to exist in the body of supermodel Naomi Campbell).

And here’s where Cookie teaches us the true meaning of next-level. She presses pause on the zingers about Camilla’s age (even though she’s pretty sure she might be the younger woman in this Oedipal troika). She doesn’t raise a hand. She barely raises her voice. Instead, she drops a retort so out-of-left-prison-field, there’s almost a Matrix-esque slowdown of space and time and the definition of human civility.

“I wish you were,” Cookie snarls. “You probably would’ve made a good bitch for me — you look like you got a long tongue.”

Mic dropped? Oh, fake-ass Lena Horne, THERE IS NO MIC!

But Taraji P. Henson’s alter-ego isn’t merely a quote-generating machine — although you can add “You want Cookie’s nookie? Ditch the bitch!” and “Well, what can you do, Yoko? Can you play the tambourine?” to the inevitable holiday checkout-aisle best-seller The Wit and Wisdom of Cookie Lyon. She is a mother, first and foremost — as we saw from her pre-verdict flashbacks all the way through present-day, wind-beneath-their-wings moments with her sons. She is a businesswoman — always and forever. And she is a lover — one who can go from playful to scornful in the time it takes Lucious to tell her he’s not only choosing to marry Anika, but he’s pushed up their wedding date, to boot.

But before this recap turns into “Cookie Weekly Appreciation Post No. 8” (“Too late!” you say), let me recap the action — because there was a lot of it in “The Lyon’s Roar”: 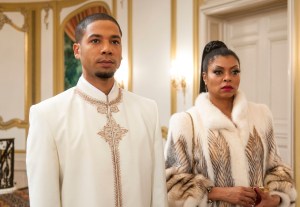 TRAPPED IN THE CLOSET… NO MAS | Jamal tells Hakeem he’s considering staying in the closet — however much being closeted is possible with an equality-symbol tattoo on his forearm — at least until Lucious succumbs to his ALS. But then his dad goes and hires hot director Ryan to do a Lyon family documentary— and he and Jamal hit it off over drinks. “Do it for yourself. Do it for your daughter,” encourages the out-and-proud filmmaker, which prompts Jamal to go home and serenade his toddler daughter with a cover of “The Lion Sleeps Tonight” that is beyond precious and proves that within a week or two of meeting his child, he’s already a better father than the man who once hurled him into a trash can. Suddenly, all of Jamal’s talks this season about authenticity and honesty begin to bear fruit at Empire’s White Party — especially after Lucious gives him a big speech about how he needs to “tell your truth in the music.” We know what’s coming next: Jamal gets up on the stage and performs his dad’s classic “You’re So Beautiful” — but tweaks to chorus to, “It’s the kind of song that makes a man love a man.” The crowd goes wild, and the elated looks on the faces of Jamal’s family — Andre, Hakeem, Cookie, even Vernon — cap off a two-Kleenex moment. Lucious, though, neck deep in his homophobia, cannot see the beauty that’s happening right in front of him. But the longer he clings to his disapproval, the more he risks losing Jamal’s love forever. I mean, the middle Lyon son has no shortage of support — as we see in a morning-after scene where Hakeem visits and tells him his performance was “the bravest thing I’ve ever seen in my life.” It would be so easy for the show’s writers to define Jamal and Hakeem by their sibling rivalry, but instead, the genuine love and affection between them adds shading and tone, and makes for one of primetime’s most intriguingly nuanced relationships. 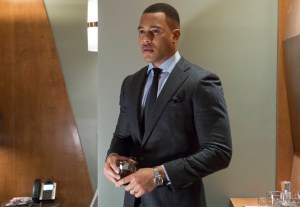 ODD BROTHER OUT | In a brief but totally heartbreaking scene, Andre witnesses his parents and brothers reuniting in a recording booth — a stinging reminder he’s the only Lyon without “talent.” And so he and Vernon concoct a plan to get the Empire board to name him backup CEO (in the event something happens to Lucious). Andre targets a December-May couple — he’s a horny old dude in wheelchair (whose paralysis does not affect his P) and she’s got a penchant for the ladies — who control a crucial swing vote. “You know any hot blondes who like to use sex for power?” Andre asks his wife. But when they arrive for dinner, a drunken Rhonda winds up vomiting in her salad bowl — and later raging that she and Andre’s extracurricular games aren’t so fun when he’s trying to turn her into “a geriatric whore.” Even worse, when the board finally sits down, it’s Lucious who votes “No” to Andre’s plan — and the eldest Lyon son thinks it’s because his talent lies in making money, not in making music. Oh, but hold it now: Turns out Jamal isn’t the only child whose personal relationships are fair game for Lucious’ knee-jerk disapproval. Daddy Dearest says Andre lost his support, “the moment you brought that white woman into my house” and adds that he wants to “leave [Empire] to somebody who cares about my family — not someone trying to tear it apart.” Wait, what? Maybe there’s something in Lucious — having sacrificed Cookie to the prison system to build his business — that makes him sabotage his children’s romances? Whatever the case, it’s seriously twisted — and it ends with Andre in a studio, playing Russian roulette to the tune of “The Great Pretender,” then wailing in agony when fate decides that he gets to live another day. The show, to a large degree, has made Andre’s bipolar disorder a B plot for the first eight episodes, but Trai Byers performance here reminds us there is a lot more that can and should be explored. 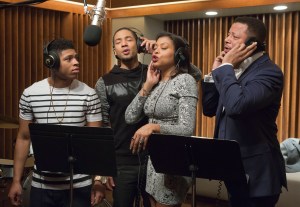 LOVE AND MOTHER DISASTERS | The episode opens and closes with bruising flashbacks into Cookie’s past. The former finds her recalling the day of her drug conviction, as she said goodbye to Lucious and her boys in a courthouse hallway. We’re reminded here of just how young Hakeem was when Cookie went away — probably no more than two years — and it explains the bratty rapper keeping his mom at arm’s length. When Lucious agrees to let Cookie produce a legacy record, documentary and concert that will make him “immortal,” she’s finally able to figure out that her youngest child is like a Nick Jonas lyric — jealous of her relationship with Jamal. “I just know him better — that’s all,” Cookie says, and we can see in their subsequent interactions that the ice is melting — and that Camilla could very soon plunge through into the cold waters below. After Andre’s treachery and Jamal’s announcement, though, Lucious’ shiny, happy illusion gets shattered — because apparently runaway corporate ambition or speaking your truth about your sexual orientation are worse crimes than shooting Cookie’s cousin at close range in the head — and he calls off the legacy project. “The whole world knows,” Cookie pleads about Jamal revealing he’s gay. “No one cares. The world is still spinning!” But Lucious sees it all differently: “This is not a family. It’s a disgrace.” Cookie doesn’t have a saucy retort this time: Instead she picks up a framed photograph and reminisces about her time in an 8×8 concrete cell, where that same photo once hung by a piece of Scotch tape. “You’re so beautiful. I’ll still wait for you,” creaks this beaten-down woman, the slightest hint of a smile the only evidence of the proud, outspoken label exec we’ve come to know in the present day. We know, now, the legacy project was just a piece of a larger puzzle: One that, in the end, our protagonist hopes will be a whole portrait of herself and Lucious and Andre and Jamal and Hakeem staring up from the table and smiling. Oh, what a long journey Cookie has ahead of her! 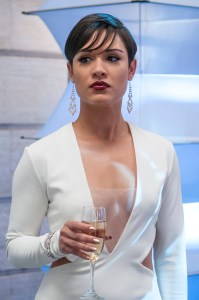 THINGS THAT MAKE YA GO “BOO?” | At the top of the hour, Cookie reminds Lucious he’s the only man she’s ever been with — but despite their night of passion, she’ll be “closed for business” ’til he dumps “fake-ass Halle Berry.” Anika, though, having witnessed Lucious with his “hand” in the “Cookie jar” confronts him at the office: She knows Lucious got her father to commit fraud on the health-clearance forms for his IPO, and if Mr. Anika’s Daddy falls, Anika reminds her fiancé that he’ll be doomed, too. And then she uses her leverage to get the wedding date pushed up to the weekend after the White Party. Cookie, though, having gotten the “Save the Date” (casually, not via U.S. mail) hunts down her rival and spills the intel that she’s had her way with Lucious again — this time in an Empire studio. “Congratulations,” smiles Cookie, adding a tablespoon of Kosher salt to Anika’s open wound. “You look pretty.” But Anika being No. 3 (with a bullet) on the Empire most bad-acts list — sorry, Lucious’ recent homicide and Cookie’s gang-style hit on a rival have them in the top slots no matter how much they make me laugh — does not take this news casually. Instead, she puts on her best red feather coat from the Big Bird Collection and rides to the home of Empire’s No. 1 rival, Billy Beretti. All I can say is Boo Boo Kitty better check her calendar to see how many lives she’s got left before pitting herself against Empire’s sole HBIC.

On that note, it’s your turn. What did you think of this week’s Empire? What were your fave Cookie zingers? How worried are we about Andre? Did you dig the Jamal-Ryan chemistry or do you miss Michael? And did you tear up after Jamal came out? Hit the comments with your thoughts!