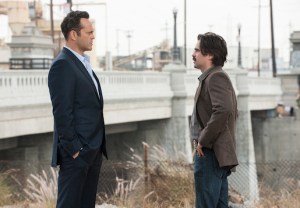 Sure, he was no Jon Snow, but sending True Detective‘s Ray Velcoro to his almost certain end in the final moments of only his second episode? That’s cold, HBO. Like, north-of-The-Wall cold.

Though maybe we shouldn’t be surprised by the ruthlessness of a series that spends this week’s installment reminding us nothing, good or bad, lasts forever — including your junk if you’re a shady public official with a habit of cheating mobsters out of their cash.

Let’s review what takes place in “Night Finds You.”

THIS TOO SHALL PASS | We open on Frank in bed with Jordan. He’s staring at a water stain on the ceiling, and as she draws him out of his brooding, we learn that his drunk of a father once locked him in the basement and went on a bender, then got arrested… meaning that little Frank was down there for five days, most of it in the dark and some of it fighting off rats who nibbled on his finger. “What if I’m still in that basement in the dark? What if I died there?” he muses while Jordan looks appropriately horrified. The near-dripping ceiling has him thinking about the impermanence of life — “Everything’s papier mâché” — and he’s got a nagging feeling that “something’s telling me to wake up.”

Know who’s definitely not waking up? Ben Caspere, the Vinci city manager who was found dead at the end of the season premiere. As Woodrugh, Velcoro and Bezzerides look on, a medical examiner determines that Caspere’s eyes were, indeed, burned out, that he had gonorrhea (lovely) and that he died of a heart attack brought on by trauma. And then, with absolutely no warning, we’re treated to a shot of the man’s mutilated Speedo area. Ugh, True Detective. (Side note: Take Ani’s reaction and multiply it by 500 and you have an idea of what my face looked like when I saw that mess.)

ONE TEAM, MANY COACHES | All three cops are officially put on the murder case, though it quickly becomes clear that they’re all serving different masters. Basically, the state doesn’t trust anyone associated with Vinci, so they want Paul to be their eyes and ears (and strapping, smooth chest) in the investigation. Meanwhile, Ani’s bosses task her with keeping new partner Ray, whom they suspect is “bent,” under her thumb. Caspere’s death, the state officials say, “is a window into everything.”

Meanwhile, the Vinci mayor — who’s as toxic and corrupt as everyone else in that cesspool of a community — advises Ray to “control the sprawl, control the flow of information” and generally make sure things turn out well for the city. But should he try to solve it? Ray asks. Unclear. And to complicate things even further, Ray’s also working for Frank, who strongly implies that he needs to be kept in the loop — or else.

THE STATE OF FRANK’S BANK | That feeling that Frank had earlier? The water stains were right: As it turns out, Caspere took a bunch of the gangster’s money — under the guise of a short-term holding company, which would then buy into the rail project celebrated in the season premiere — but never bought into the rail line. So Frank’s out millions of dollars with no way to raise more (his house and the casino are already double-mortgaged), and he. is. freaking. He also really, really wants to find out who offed Caspere.

So Frank joins the ranks of people trying to figure out who killed the creepy little city manager, and he comes up with something of note: the address of a house where Caspere used to take hookers. More on that in a minute.

‘YOU’RE NOT RIGHT’ | Paul goes to visit his mom, who lives in a trailer and is a little too handsy for my tastes, to tell her he’s going to be away for a while as he investigates the murder. He does the same for his lady friend, who has finally found out about the scandal involving the speeding starlet. As he packs his bags, their conversation quickly turns into a fight, which even more quickly turns into something truly ugly. The words “Black Mountain Security” come up again, but he shuts her down — “I told you, I don’t talk about the desert” — and she realizes that there’s not enough Viagra in the world to make this sham of a relationship worth her while anymore. “God, whatever happened to you, I can’t fix it,” she says, adding “You’re not right” and “Don’t come back” before he walks out the door.

And while we’re on the topic of painful conversations with exes, Ray goes to meet his son for a visit but finds his ex-wife, instead. The kid is terrified to be around him, she says, and she’s well aware of his little visit to the bully’s house. “Sometimes a good beating promotes personal growth,” Velcoro says, pretty much cementing his ex’s decision to petition for court-supervised visits from here on in. “You’re bad, you’re a bad person and you’re bad for my son,” she says, threatening to get a paternity test if he challenges her.

GETTING TO KNOW YOU | Ray’s terrible family situation comes up when he and Ani drive together. It’s one of the “rumors” Velcoro tells his new partner she’s likely to hear about him, that he killed a man who hurt his wife (we later find out this is true), he’s beholden to a mobster (we already know this is true) and that he has some terrible habits (duh). He only cops to the last one, and when she point-blank asks him if he’s corrupt, he simply bids her goodnight.

Also discovered during their first car ride: Ani wears a lot of knives to even the playing field between her and men; if a dude tries anything ridiculous with her, “he’ll bleed out in under a minute,” the petite badass promises. Ray’s response: “I support feminism, mostly by having body-image issues,” which gets a quarter-smile from her. (Runner-up for my favorite quote from that conversation is, RAY: “You know that expression about flies and honey?” ANI: “What the f—k do I want with a bunch of flies?”)

RAY GETS THE BIRD | Frank and Ray meet in the bar where Ray passed out last week — did you notice the Lone Star neon sign/Season 1 nod on the wall? — and Semyon passes Velcoro the address, along with a vague promise that he can be Vinci chief of police next year if the investigation goes Frank’s way. In light of probably losing his link to his son, Ray is tired of their whole deal, but Frank’s all, “La la la I can’t hear you no seriously, shut your face I own you.” After Semyon leaves, the nice-and-scarred waitress is very sweet and a little flirty to Ray, who also takes off. Oh honey, RUN THE OTHER WAY.

Velcoro visits the house, which features a pool of blood on the floor and some disturbing, elaborate, full-head animal masks hanging on the wall, as well as a sex swing (at least I think that’s what it is, they don’t cover this kind of thing in my Bible-study class MOM) and a motion-sensing camera in one room. But before we can get a better look around, someone wearing a crow mask steps into the frame and shoots Ray, then walks over to the felled detective and fires again, at point-blank range, into his chest. Vaya con dios, Velcoro?