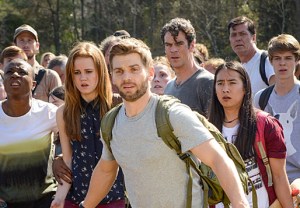 A little more than a month ago, the minds behind Under the Dome insisted — nay, promised — that by the end of the CBS sci-fi drama’s third season, viewers at home would have all of their many questions answered.

And, despite The Great Egg Mystery of 2014 — which became one of the series’ biggest head-scratchers in Season 2 — I really do think those of us tuning into Under the Dome‘s third go-round have every reason to believe the bosses when they say our queries will be resolved.

Before we can get to those answers, though, Thursday’s season premiere offered up quite a few more questions for us to ponder.

The two-hour episode was very — as my colleague Matt Mitovich would say — “timey-wimey,” jumping between two parallel timelines before revealing how both of them were connected. I’ll do my best to break it down easily:

BEHIND DOOR NO. 1 | Picking up precisely where last season left us, Melanie is waiting on the other side of Chester’s Mill’s underground tunnel, prepared to take the town residents “home,” wherever that might be. Barbie leads the group into the white fog, and when the mist clears, they are all…. outside the dome. Not only that, but once they have exited the tunnel, the dome surrounding Chester’s Mill shatters into countless pieces and essentially flies away into the breeze. (Aaaand fade to black. What a great series finale!)

Actually, the dome’s disappearance is just the beginning of a long, strange transition back into regular society for Barbie & Co. When Barbie makes good on his promise to retrieve Julia from Chester’s Mill, he finds that she is dead in the woods, along with Big Jim and Junior. And, unlike that time she nearly died from hypothermia/an impaled leg/any number of medical maladies over the last three weeks, Julia does not regain consciousness. 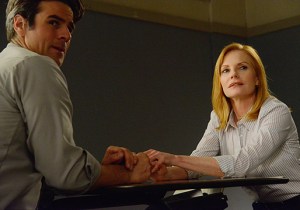 The series then flashes forward one year, where Barbie and the rest of the Chester’s Mill residents have essentially moved on. Barbie has returned to his military work — we find him in Yemen, where he has teamed up with computer whiz Hunter — and he’s currently dating his operations manager, Eva (Kylie Bunbury, Twisted). Everything seems to be going swimmingly for Barbie, if you don’t count the nightmares he’s still having about Julia’s death.

Eva suggests that Barbie return to Chester’s Mill for the town’s upcoming one-year memorial, in order to get closure and move on, and he reluctantly agrees. But once he arrives in the town (where the residents are mysteriously chipper these days), he is confronted by Joe’s skateboarder friend, Ben, who insists that something is wrong with the town. In fact, he doesn’t believe the town is real at all.

I’ll spare you all the minutiae of this seemingly parallel universe (Sam’s in jail? Norrie’s in a sorority?! What’s Marg Helgenberger up to?) and cut right to the chase: Ben was right. The brand spankin’ new Chester’s Mill is an alternate reality that doesn’t exist at all. Rather…

BEHIND DOOR NO. 2 | …it’s all a vivid hallucination being perpetuated by Melanie, who, in the real present-day, is still in the tunnel underneath Chester’s Mill. There, she has every single town resident locked up in “cocoons” — small tanks filled with water that are powered by pink, glowing branches of light. As each character sleeps in their cocoon, they dream of living in this alternate reality, which Melanie can control with a flick of her wrist.

Meanwhile, Don Barbara is still trying to get the all-powerful egg back in Melanie’s possession, which means he must climb through that ol’ cellar door in Zenith and travel to Chester’s Mill via the lake. Once he arrives, sopping wet, Melanie kills her dad like it ain’t no big thang and takes the egg to the tunnel. There, the egg — which is once again shimmering with pink stars — serves as a power source for the tunnel, causing all of the pink branches to glow even stronger. (It’s unclear what purpose Melanie’s evil streak is serving, but she keeps referring to “we” and “they,” a group that I can only assume does not have Chester’s Mill’s best interests at heart.)

Julia finds Melanie up to no good in the tunnel, and just before Melanie can toss Ms. Shumway into a cocoon of her own, Big Jim shows up and opts to save the day. Despite Melanie’s pleas that he not “ruin all of [their] progress,” Big Jim smashes the egg from its perch, causing the tunnel to go dark and allowing the Chester’s Mill folks to emerge from their sticky, creepy cocoons. (As if they hadn’t already been through enough.)

OK, your turn. What did you think of Under the Dome‘s return? Grade the Season 3 premiere via our poll below, then hit the comments to back up your choice!