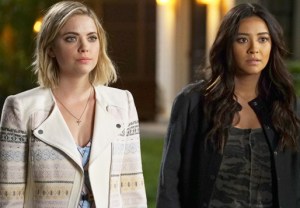 It’s still anyone’s guess what the future holds for the Pretty Little Liars, following Season 6’s impending five-year time jump, but we do know their next steps will find them crossing paths with several interesting gentlemen.

TVLine has learned exclusively that two male characters will recur in the second half of Season 6: Jordan, a sophisticated-yet-approachable 27-year-old working in the fashion industry, and Liam, a 24-year-old editorial assistant from Boston.

Could these new additions provide hints as to where the girls will end up in five years? Publishing seems like a perfect fit for budding-writer Aria, and I’ll give you one guess as to which girl I see working in fashion. (Then again, Aria’s current interest in photography also puts her in the running for a fashion-related career, and I could totally see Spencer in publishing. The mysteries continue!)

“We’ve been talking about [the time jump] for years,” executive producer Oliver Goldstick told TVLine back in March. “This is the same group of writers who have been here since Day 1, so a lot of the ideas that have been bandied about, even two or three years ago, are just now coming to fruition. We’ve had the writing on the wall — literally, on the board of our writers room — as to where these girls are going to end up. But we’re surprising ourselves, too. There are some juicy developments that we didn’t expect, which I think the audience is going to love.”

Time to weigh in on the girls’ post-time jump plans: Where would you like to see them all end up? Drop a comment with your thoughts and theories below.