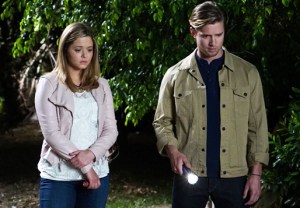 With Alison and Jason demanding concrete answers, Papa DiLaurentis was forced to open up his Big Book of Lies on Tuesday’s Pretty Little Liars and rattle off Charles’ (alleged) backstory.

If Alison’s dad is to be believed — pardon my skepticism, but this ain’t my first day in Rosewood — Charles was the eldest DiLaurentis, born 15 months before Jason. He exhibited troubling symptoms at a young age, and by the time Alison turned one, he was “too dangerous” for her to be around. (Example: Mr. D caught him trying to drown Alison in the bathtub.) Charles was then shipped off to Radley, where he committed suicide at the age of 16. So… no happily-ever-after there.

As for why no one in Rosewood has any memory of Charles’ existence, the DiLaurentis clan apparently moved to the troubled town after he’d already been committed. At the time of his death, Mr. D was out of the country, so Mrs. D had him cremated; there was no funeral. I believe Hanna’s response best sums up my thoughts about this convenient explanation: “No body, no grave, no proof.”

When the girls discovered that Charles had only been visited by Alison’s aunt Carol during his Radley stint, Jason conveniently remembered that he tried to stay at Carol’s house while recovering from his fall down the elevator shaft (which we’re now apparently allowed to address again). When he got there, he was surprised to see his own mother, who claimed there was no one else in the house — despite there obviously being someone else there. And since the girls were unable to find any records of Charles’ death, we have to ask: Could he have been alive, and hiding out with Mama D’s help, all this time?

HIGH TIMES | Because pills are so Season 4, Spencer is turning to a slightly greener substance to help ease her Charles-induced nightmares. (And can you blame her? If I was having flashbacks to my kidnapping, during which I woke up covered in a stranger’s blood, you can bet your doll collection I’d be smoking myself into a delightful stupor.) Ezra did his best to stop Spencer from nomming a batch of his waitress’ special brownies, but Spencer wasn’t exactly in the mood for an after-school lecture — and I can’t say I was, either. Bring on #StonedSpencer!

SWIMFAN | My Sara-is-Charles theory is starting to look pretty thin right about now, but fortunately for my ego, my other theory — about Sara and Emily getting their flirt on — appears to be proceeding as predicted. They even shared a moonlight dip, very reminiscent of Emily and Paige’s synchronized night swim from Season 3. Should we start taking bets on when one of the girls will make a first move? (I’m choosing to ignore the potential weirdness with Sara on the roof, but only because I really want Emily to be happy.)

‘WE [ARE] ON A BREAK!’ | But as one Rosewood couple is coming together, another is quickly being torn apart. Yes, friends, Hanna officially told Caleb she needs some “space” after learning that he’d placed a tracker on her car, the latest in a series of overprotective moves that left her feeling suffocated. If I may speak directly to Hanna for a moment… Girl, what are you doing? I know Charles put you through hell, but do you really think kicking this out of bed will help? I mean. I just. Please reconsider.

PICTURE THIS | In addition to learning the twisted origin of Aria’s new haircut — Charles apparently chopped it off, Jan Brady-style, after she refused to color it — we also saw the origin of a potential new relationship. Aria thought she’d suffocate in the darkroom after Charles/”A” locked her inside, but in true PLL fashion, a handsome stranger named Clark showed up just in time to save the day. (Disclaimer: I know I’m guilty of immediately thrusting characters into romantic connections, but with this show, I think I’ve earned that right.)

Do you have any new theories about Charles, Sara or A-nything else after this week’s episode? Drop ’em in a comment below.