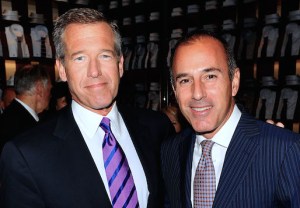 With his exit fom NBC News now confirmed, Brian Williams has opened up about the controversy that ended his Nightly News anchor stint — and NBC colleague Matt Lauer conveeeeniently scored the big get.

As first reported by CNN (and since confirmed by NBC News), Williams earlier this week sat down for an interview with Lauer, to air Friday on Today and Nightly News — in the immediate wake of NBC News announcing that Lester Holt would remain Nightly News anchor, while Williams is shuttled off to cable sister MSNBC.

Williams announced in early February that he was taking a leave of absence from NBC, after it was discovered that during a Jan. 30 Nightly News piece he falsely claimed his helicopter was hit by a grenade in March 2003 as he covered the Iraq War.

Days later, NBC News announced it was suspending the longtime anchor for six months, while it investigated his “wrong and completely inappropriate” “misrepresent[ation] of events which occurred while he was covering the Iraq War.”

On Wednesday of this week, word spread that Williams would not be returning to the Nightly News anchor slot, but remaining with NBC News in a new capacity. On Thursday, NBC News announced Williams’ reassignment to MSNBC, while the veteran newsman himself apologized for his exaggerated anecdotes and vowed to “earn back” viewers’ trust.