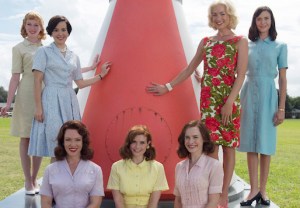 First rule of The Astronaut Wives Club: Don’t talk about the crushing fear and loneliness you know as the spouse of one of America’s first space cowboys.

Second rule of The Astronaut Wives Club: When in doubt, don pearls and a little lipstick.

ABC’s 10-episode period drama, which premiered Thursday (8/7c), centers on the spouses of the Mercury Program astronauts and their part in the late ’50s/early ’60s scramble to put a man in space. Written by Stephanie Savage (Gossip Girl) and based on the book by Lily Koppel, the premiere focuses on the proper-to-a-fault, emotionally guarded Louise Shepard (played by Dominique McElligot, Hell on Wheels), husband to Alan Shepard (Desmond Harrington, Dexter).

By the end of the hour, Alan becomes the first official American astronaut. But in an extended flashback to the two years before that, we watch the wives first encounter one another at a Life magazine-sponsored party for the future space cowboys. As the ladies size each other up, we meet them, too. A rundown of the other wives, in handy guide form:

• Rene “Rhymes With Peachy Keen” Carpenter (Yvonne Strahovski, Chuck): Wife of Scott Carpenter (Wilson Bethel, Hart of Dixie), a bubbly platinum blonde who doesn’t mind a little time in her husband’s spotlight
• Annie Glenn (Azure Parsons, Salem): Wife of John Glenn, rarely speaks because of her stutter
• Trudy Cooper (Odette Annable, House): Wife of Gordon Cooper, a pilot herself who dreams of becoming an astronaut someday; on the verge of a divorce from Gordon
• Betty Grissom (JoAnna Garcia Swisher, Once Upon a Time): Wife of Gus Grissom, a gee-whiz mother of two
• Marge Slayton (Erin Cummings, Detroit 1-8-7): Wife of Deke Slayton, a brassy broad with a mysterious footlocker full of kimonos
• Jo Schirra (Zoe Boyle, Downton Abbey): Wife of Wally Schirra, has kids… researches whether red or white wine goes with hot dogs? (Yeah, we don’t learn a lot about Jo in the premiere.)

As the seven men train for orbital spaceflight, their wives agree to give their exclusive story to Life, which means a reporter and photographer document their lives as they become “American royalty,” says NASA flack Dunk Pringle (Evan Handler, Californication). The publicity comes with perks — new cars, a nascent celebrityhood — which the women coo over. But when they surprise the men during a training session at Cape Canaveral, only to learn that the guys are carousing and hanging out with space floozies, it becomes clear that the story Life is selling is not necessarily the truth.

RELATED Exclusive: Once Upon a Time Casting Rumple’s Mom — Dare We Hope for Karen Gillan?

Alan, for instance, can’t seem to keep his space belt buckled. And although that bothers Louise greatly, she steadfastly supports her man in his bid to be first. When he is chosen, right after the failed launch (and ghastly explosion) of an unmanned rocket, Louise rebuffs the ladies’ attempts to comfort her and turns down their offer to watch Alan’s launch with her.

So Louise watches with the Life reporter and her two daughters, and when the mission is a success, she nearly faints in relief. “Alan can never know I was scared,” she later tells the reporter. “No one can.”

With Alan back at Cape Canaveral working on the next step — NASA putting a man on the moon — Louise shows up at Trudy’s doorstep with an apology and winds up getting an informal party started. Eventually, the other wives join in, and the hour ends with some awkward dancing and the news that Betty’s Gus will be the next one to blast off.

The premiere’s sheer amount of exposition is a lot like those bulky rockets towed out to the landing pad: necessary, but not what we came to see. Introducing the ladies and their husbands takes a while, and some — like poor Jo — at this point are just sketches instead of fully realized characters. But the nine episodes left offer plenty of chances for sparklers like Strahovski, Garcia Swisher and Annable to do their ebullient thing, so we wouldn’t label this mission a flameout just yet.

Now it’s your turn. What did you think of the episode? Grade the premiere via the poll below, then back up your pick in the comments.