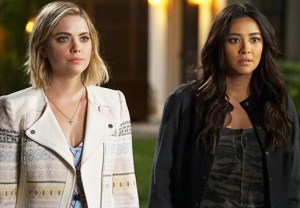 Pretty Little Liars finally answered the big “Who is Charles DiLaurentis?” question on Tuesday, and it was beyond anything I could have imagined. (See what I did there?)

Apparently, Charles — also referred to by the impossible-to-crack nickname “Charlie” — was Jason’s imaginary friend when he was younger… until, for some unknown reason, Jason’s dad told him that Charlie had to “go away.” (Side note: Between PLL and The Whispers, what is it with this summer and evil imaginary friends?!)

Still, it’s possible Charlie isn’t entirely imaginary; super-sleuth Aria discovered a childhood photo of Jason standing next to a boy neither Alison nor Spencer could identify. And it definitely wasn’t Andrew, because he’s been let out of jail and he’s super salty about it. Like, he straight-up called the girls “toxic dumps” to their faces. Salty.

At the end of the hour, Papa DiLaurentis took a break from his 24/7 job as a mean-mugging scarecrow to tell Alison and Jason the truth about Charlie — but in typical PLL fashion, the conversation was only shown through the window of their living room, which means we’ll have to wait another week to find out what was actually said. (In the meantime, we’re left with this promo.)

SUSPECTING SARA | Am I crazy for already ‘shipping Emily with iZombie? Sorry, I mean “Sara”? Despite their lack of chemistry, I feel like the show is hinting at a potential coupling, so I’m just going to bite the bullet and root for ’em. That said, I’m also mighty suspicious of Charlie’s sixth captive. Does anyone else think he wanted Sara to be found, and that she’s helping him by getting closer to the girls? His little FaceTime stunt — is that whole death-threat countdown clock a new feature? — certainly didn’t do anything to quell my suspicions. One thing’s for sure: This show show is giving me serious trust issues; I’m long overdue for a session with Dr. Sullivan.

#ALORENZO | I’m not saying that a leopard can’t change its spots, but Alison DiLaurentis… a youth leader? I’m not sure I’m ever going to picture that, especially since Ali’s most memorable church moment involves her slapping Mona across the face. Still, I’m curious to see where her relationship goes with Lorenzo; she might have finally found the authority figure of her dreams.

Additional stray observations:
* I’m glad the girls never actually shocked each other in Charles’ lair. That would have hurt.
* Jason’s beard: yea or nay? (Drop a comment below!)
* Did they really bring Dr. Sullivan back just for Hanna and the girls to blow her off?
* I’m glad Ezra is trying to keep Aria safe, but let’s never forget: He stalked her first.
* Pretty excited about Spencer’s next spiral.

PLL fans, your thoughts on this week’s reveal(s)? Drop ’em in a comment below.