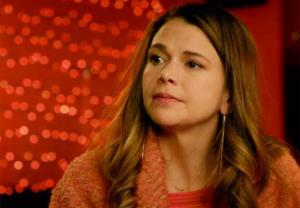 THE PERFORMANCE | In many ways, Younger‘s initial 12-episode run has thrown just as many challenges at Sutton Foster’s character — Liza Miller, a 40-year-old divorcé masquerading as a 26-year-old publishing assistant — as it’s thrown at the actress, herself. And while Tuesday’s season finale proved to be a stressful, harrowing half-hour for Liza, it was an embarrassment of riches for the viewers, as we were served all the colors of the Foster rainbow in one delicious sitting.

A lot of things come easily for Liza — including the ability to pull off any number of mismatched patterns — but honesty has never been one of them. So we felt her pain, every last ounce of it, as she came clean to her 26-year-old boyfriend Josh about being slightly older than previously stated. And being divorced. And having an 18-year-old daughter. (It was a lot, as you can imagine.) The cocktail of fear, anxiety and unadulterated pain in Foster’s voice as she confessed her sins was as difficult for the audience to swallow as it was for her character to spit out. But with honesty often comes relief, and we could actually see the weight being lifted off Liza’s shoulders, even if that honesty left her heartbroken and alone.

Which brings us to Foster’s next stand-out moment: her masterful takedown of guest-star Martha Plimpton, playing a former co-worker of Liza’s who attempted to blackmail her into revealing company secrets. Every confident statement and don’t-mess-with-me look proved that this was no longer the same Liza we met in the pilot, or even the same Liza who was forced to spill her guts at the top of the episode. This was Liza 2.0, the age-appropriate phoenix who had risen from the ashes of her mistakes. As for Liza’s dramatic exit after fully burying her opponent with her own words? Well, we nearly mistook Foster for Beyoncé, she was that much of a boss.

Then came the grand finale, Liza’s hopeful reunion with Josh. Sure, they’ve got a few kinks to sort out, and you can bet there will be trust issues moving forward, but the promising look on Foster’s face was enough to tide us over until we find out if they have what it takes to stay together. Season 2 can’t come soon enough.

HONORABLE MENTION | As much as Lifetime’s UnReal reveals how the reality-TV sausage is made (cash bonuses for disingenuous edits!), it also offers a look at the people behind the producer-manipulated puppets. Greek grad Johanna Braddy has stepped to the fore as Anna, an Everlasting beauty whose road to romance was detoured by her dad’s death. As intrepid Rachel rallied to turn this lemon of a twist into champagne, Braddy made us feel Anna’s distaste for the machine she’d been caught up in. Cementing her nod here were two moments: the funeral scene where unadorned Anna fielded Adam’s invite back, and the “rose ceremony” where she chastised him for drawing out her fate. Anna may have been painted a villain, but Braddy has us rooting for her.

HONORABLE MENTION | Sydney Lucas may not have gone home with the Tony Award for Best Featured Actress in a Musical Sunday night, but she sure won US over. Singing “Ring of Keys” from Fun Home, the musical based on Alison Bechtel’s graphic memoir, the 11-year-old blew us away not only with her voice – an instrument as lovely as it is powerful – but with her stunningly expressive face. As a result, it wasn’t the raging storms or legions of dancers that other shows trotted out that still had us buzzing Monday morning, it was her honest – and honestly dazzling – performance.