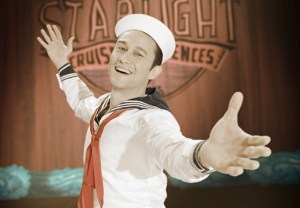 When you think “variety show,” you likely conjure up images of such classic entertainment programs as The Carol Burnett Show, The Sonny & Cher Comedy Hour and Saturday Night Live. (Or, if your tastes are stuck in the early 2000s, The Nick & Jessica Variety Hour).

Joseph Gordon-Levitt, however, is hoping to further redefine the variety show genre with the second season of his Pivot series HitRecord on TV, which kicks off tonight at 10/9c. (The season premiere is also available for viewing here.)

For those unfamiliar with Gordon-Levitt’s HitRecord.org project, the site launched in 2005 as a way for users to collaborate on creative projects — everything from short films to cartoons to documentaries to music. After nine years of Internet-based collaboration, the efforts moved to the small screen in 2014 via HitRecord on TV.

“Everything on the show is made in a different sort of way than your average TV show, because we use the Internet and we open up these collaborations,” the actor explains to TVLine. “In that way, this community of hundreds of thousands of people from all over the world are able to collaborate and make things together, and that’s how we make the show.” 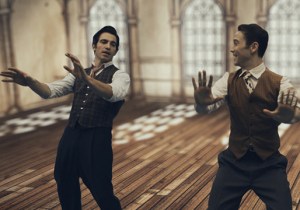 And, with the creative freedom to explore nearly any topic he and his contributors wanted, Gordon-Levitt’s fans put their heads together for a “more focused” and “more refined” Season 2. Each of the season’s eight episodes revolves around an abstract theme — including “the dark” and “the number two” — and HitRecord‘s contributors created artistic projects related to said theme.

“In that way, the cream is able to rise to the top,” he says, “and we’re able to — out of thousands of contributions — really see what the eight themes are that are most resonant with the community, and those are the eight that we picked.”

“Doing the superhero spoof with Annie Hathaway was really fun,” Gordon-Levitt recalls with a laugh. “It was fun for her to shake off the seriousness and be silly. She plays this villain named Vivica Virus, and I play this hero named Brock Blaster, and we’re both these obnoxious, idiotic superheroes, because the main characters of the short film are actually our sidekicks. It’s about the plight of being a sidekick.”

And lest you worry that Gordon-Levitt and his HitRecord team will run out of creative ideas anytime soon, think again: The actor insists his contributors are “just scratching the surface,” adding that his fans’ most out-of-the-box ideas are often “the strength of our show.”

Planning to check out HitRecord on TV‘s second season? Ever made a contribution to Gordon-Levitt’s site? Hit the comments!